Turning the sound down

As higher density living becomes more common, nuisance noise and its possible impact on health is becoming an all-important topic. With one of the most invasive irritations being impact sound, Chris Willett of Schöck describes an innovative solution for staircases

It will come as little surprise that social surveys across several European countries indicate that noise from neighbours in residential complexes causes annoyance to varying degrees. The type of noise can take various forms of course, but a particularly invasive irritation is impact sound. Footsteps on common stairs and stairwells is a typical example, transmitting sound through solid structures and cavities in the building. This can become more than just an annoyance however, and a number of health studies have looked into the different effects of ‘community noise’ on individuals. The findings are wide-ranging, but suggest that regular noise interference can result in symptoms such as sleep loss, headaches, anxiety and loss of concentration, and in some cases raised blood pressure and even an increase in the potential for aggressive behaviour. So with the inevitable move towards higher density living in many European towns and cities, appropriate acoustic performance standards are becoming more important than ever for residents.

Urban living on the rise

There is, however, considerable disparity between UK mandatory acoustic standards and those in many parts of Europe. This is possibly a result of the historical differences in dwelling types. In the UK only 14 per cent of the population have traditionally lived in apartments, one of the lowest European percentages, whereas the average for apartment living across Europe is 48 per cent and in many cases higher. In Germany, for example, it’s over 60 per cent. However things are changing in the UK, where urban and therefore primarily apartment living, is dramatically on the rise. According to the Office of National Statistics, between 2002 and 2015 Liverpool was the fastest growing city centre, with a population increasing by 181 per cent. Other cities are close behind, examples being Birmingham, with a city centre growing by 163 per cent, as well as Leeds – by 150 per cent, Manchester – 149 per cent and Leicester – 145 per cent. In terms of sheer numbers, the fastest growing city centre was London, but due to overall population density this amounted to a relatively low 22 per cent increase.

This level of urban migration is resulting in a marked increase in the density of residential living and, in the interests of noise health protection, existing manadatory soundproofing standards (of which common stairs and impact sound is an important feature) are coming under ever-increasing scrutiny. Currently, Part E of the Building Regulations recommend performance standards for “separating walls, separating floors and stairs that have a separate function” as being less than or equivalent to 62 dB. The European average for staircases is around 53 dB, in some individual cases even stricter. This is significant when you consider that for human hearing, a 10 dB difference is equivalent to twice the amount of noise disturbance. The first ever standard in Europe to specify a test procedure for impact sound insulation elements was published in Germany in 2016. (DIN 7396). This was a standardised laboratory test procedure for acoustically measuring isolation systems for solid staircases.

A basis for verifying acoustic insulation

DIN 7396 specifies a test with realistic configurations and typical building loads on staircases. The weighted normalised impact sound pressure level (L‘n,w) as defined in DIN 7396 can be used as a basis for verifying acoustic insulation in buildings. This is fine in principle, but in reality, during the construction process soundproofing solutions are often used that do not comply with longer term requirements. Individual elastomer supports for example may not protect the joint areas completely, with the result that dirt and plaster can find their way into the gaps, causing acoustic bridges. Other materials may result in lower sound insulation performance, moreover there is often no acoustic validation for on-site solutions. Soft materials have a high risk of creating sound bridges, as stones or construction debris may have been transferred into the gaps. Also, if harder materials are used, such as polystyrene or foam, there is a transmission through the material itself and compliance with even with the minimum requirements is jeopardised. To achieve these with construction site materials, the whole staircase must be free of sound bridges.

An integrated impact sound insulation solution has been developed for all structural subsections on both straight and winding staircases. Known as Tronsole, this system has been designed to facilitate straightforward installation. Pascal Maier, international product manager for Tronsole at Schöck comments: “Good soundproofing is becoming increasingly important in quality construction. Staircases in particular and the elimination of impact sound and acoustic bridges is essential. The system provides standard-compliant soundproofing in apartment blocks and multi-use buildings.” Maier continues: “An individual elastomer support under the stairs is not fixed, and can slip. This can result in more than just the concrete edge breaking due to incorrect support; it also harbours the risk of dirt and gravel getting into the gap between staircase and floor slab or landing. It takes only one piece of gravel to reduce acoustic insulation performance by around 10 dB. By contrast, a system that envelopes the entire staircase minimises the risk of acoustic bridges.” Seven main product types are mixed and matched to form a fully integrated impact soundproof system, At the system’s heart is an elastomer support, formulated and designed to ensure optimum acoustic insulation and low deflection. Compared with conventional strip supports, it assures an impact sound level difference of approximately 32 dB, which constitutes an improvement of around 10 dB. Acoustic bridges will occur, and the sound reduction become ineffective, if the joints between the staircase wall and the staircase (soffit and landing) allow any dirt and material ingress. A key component of the system is designed to ensure complete soundproofing by totally sealing the joint. The system is suitable for on or offsite construction, and for emergency exits; it also complies with the requirements for fire resistance class R90 (subject to appropriate on-site additional reinforcement of the landing). 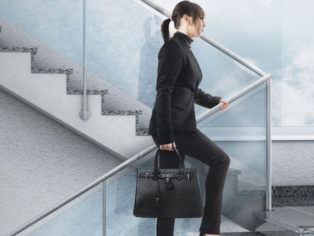 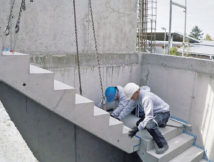 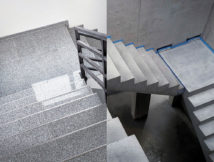 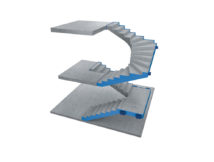