Truro City Shopping Park will include 75,000 sq ft of non-food retail space, 5,000 sq ft of cafe and restaurant space and an 11,000 sq ft gym. The new Truro City Football Club ground will include a 4,000 seat stadium, conferencing and hospitality facilities and a 3G all-weather training pitch, allowing the club to develop and nurture new talent.

The scheme is being developed by Helical Retail, with work expected to begin in May 2016 following the close of the football season. The architects for both projects are SR Davis Architects.

Speaking on behalf of the project team, Philip Challen said:

“This is an important decision that will provide much-needed high-quality retail space and a new ground for Truro City Football Club. The proposals have been developed following extensive community engagement and we welcome this decision of the Strategic Planning Committee.”

“There is considerable demand for space in this area from retailers who are keen to come to Truro but cannot find suitable accommodation in the city itself. This decision is good news for retailers, shoppers and for Truro City Football Club.”

“This was a bold decision by the Strategic Planning Committee and one that secures the future and sustainability of the Club. We will now be able to play football without fear of being evicted or being held back by a lack of facilities. We will be able to compete on an equal basis with other clubs within our league.”

Turley has a long and successful track record in advising the owners, operators and developers of sports stadia, having advised Liverpool Football Club on the development of Anfield Stadium, and Warwickshire County Cricket Club on the expansion of Edgbaston Cricket Ground. 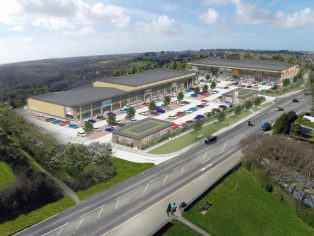