Paul Jackson, technical director at Rodeca, explains how translucent polycarbonate panels have evolved to be a viable alternative to glass

Recent advanced testing and developments in thermoplastic engineering are now positioning translucent polycarbonate panels as a serious, if previously overlooked, competitor to glass, more than 40 years after they were pioneered.

The young upstarts give glass and GRP an Olympic run for their money in terms of aesthetics, multiple performance levels, speed of installation, and not least cost, for new build and refurbishment projects in the industrial, commercial, retail, education, healthcare, and sports and leisure sectors.

Most recently, they have achieved Class B in non-fragility tests conducted by the BRE. But interestingly, these tests were carried out to ACR (M) 001:2011(1) for assessing the non-fragility of profiled panelled and large-element roofing assemblies.

This emphasis on roofing reflects a trend in mainland Europe to use translucent polycarbonate panels for roofing applications, including domestic projects, for pitches and radiuses as low as 5˚ and 3m respectively, in addition to the façade treatments (rainscreens and curtain walling) they are better known for.

Roofing applications range from curved and flat roof lights and canopies, through northern lights and gable roofs, to roof lights for corrugated sheet applications – all elements that introduce natural daylight, and the energy savings associated with that, into large or small interiors or exterior covered spaces.

Although the test was specific for roofing applications it could also be used as reassurance on projects where as a façade, roof access is possible to the face of the panels, such as northern lights or any high-level access areas.

Polycarbonate is now considered a roofing material due to the improved thermal performance of the panels, which can be manufactured with U-values as low as 0.85 W/m²K.

As such, they can allow natural daylight into a building without compromising its thermal integrity. Panels with U-values as low as 0.36 W/m²K, compared to double glazing at 2.8 W/m²K and single glazing at 5.8 W/m²K, are capable of reducing energy losses by up to 80 per cent.

The benefits of natural daylight on the human condition are well documented in terms of wellbeing, improved performance and reduced absenteeism in schools, offices and factories, but this has often been at the risk of solar gain.

Polycarbonate panels are extruded with UV protection, providing warranties up to 20 years, on both the external and internal face for double-sided walls or open screens. Pigmentation can also be added to reduce solar gain without blocking natural daylight and negate the need for a separate film over the panel.

As well as being 200 times tougher than glass, polycarbonate panels can be over half as light (m² of double-glazed 4mm glass + spacer bar + sealant at a total 22kg V a 60mm polycarbonate panel system of 8kg/m2), reducing the requirement and associated costs for large sections of additional steel to enable the building to bear the weight. This light weight also helps transportation.

Other developments in translucent polycarbonate panels are increased spanning capabilities.

The tongue and groove coupling of a polycarbonate panel proves an exemplar of modern and lean construction methods, with large-scale building widths of up to 500mm enabling facades of more than 200m long to be erected and panel heights of up to 25m to be mounted in one piece.

Experience has shown that this method reduces installation time and also contractors’ dependence on scaffolding, with many projects using only MEWPs, again reducing overall construction programmes. This speed of installation has recently been furthered by the introduction of pre-mitred corner units.

The now almost unlimited choice of RAL colours, and development of finishes and translucency levels, also means that polycarbonate panels are working their way out of the shadow of glass as a decorative material rather than just as a translucent wall.

Aesthetic options include colouring interior panels differently to exterior ones to give a 3D effect, colouring an individual panel differently through its own thickness, metallic-look pigmentations and fluorescent surfaces that glow at night, all of which can be backlit with LED or ambient lighting for additional effect.

It is transparent that the future looks bright for translucent polycarbonate panels. 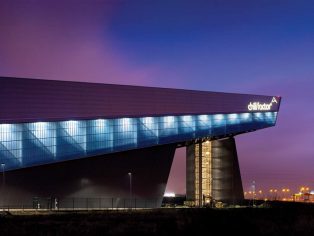 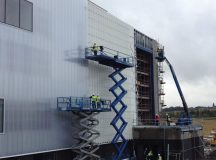