Time for CLT by the sea – The Fitzroy, Falmouth, Cornwall

PegasusLife develops ‘retirement living’ schemes with a difference. The new specialist company has bought more than 30 sites where it aims to offer a distinctive, site-specific offering to occupants, and a more aspirational, attractive and sociable alternative to traditional retirement homes.

The Fitzroy will be a new stand-out example of the concept, sitting on the impressive bay-front site of the somewhat dilapidated and now-demolished Madeira Hotel in Falmouth, Cornwall. And the concept behind the 34-apartment scheme isn’t its only unique selling-point – it is claimed to be the only retirement scheme on this scale yet seen in the UK with a full CLT frame.  One of the chief reasons behind the choice of the efficient single method of construction being the project’s very tight 12 month programme.

The scheme which is due to start at the end of May, has been designed by the Bristol office of architects Allford Hall Monaghan Morris (AHMM), working closely with structural engineer Symmetrys, both of whom have had a successful working relationship with PegasusLife on past and current projects. Cormac Farrelly, associate director at AHMM, said that the key design challenge was making the most of what was a compact site when it came to maximising space and views for the building’s occupants.

“It’s an amazing site, only 30 metres from the beach in a quiet, elevated position. However, the challenge was that as it was small, the building would have to work hard, especially making the most of orientation.” He continues: “A key driver was that where possible, apartments should have a bedroom and a living room that faced the sea, and that the majority should be dual aspect, which is really important for this typology.”

As a result of this, the building form developed with apartments ranged along the south-facing front of the building, with a glazed ‘gallery’ along the rear providing circulation. Farrelly says this is no mere corridor, being wider than normal and being lined using “enhanced materials and lighting” avoiding any sense of it being ‘back of house.’

The widths provided in apartments are generous, compared to many residential care homes, with 4.5 metre wide living rooms and 3 metre wide bedrooms as a minimum, in addition space standards overall are far in excess of national standards. He says that in addition to providing more amenity internally, this helps make the most of the great sea views.

However, with substantial glazing, there was a need to tackle shading while assuaging the tough local planning authority (the building sits in a conservation area next to a World Heritage Site). Says Farrelly:

“We wanted a contemporary take on the Victorian hotels dotted along this seafront, and there were lots of conversations with planners.” Luckily the planners were of a similar outlook, wanting a “contemporary building which responded to the gable-fronted existing hotels.”

The front elevation achieves both shading and gables using large open balconies under them which are 12 m2 in total, so big that AHMM term them “outdoor rooms.” With tall apertures in the walls that support the extruded gables they provide views sideways as well as out to sea, and extend the living rooms almost 3 metres.

In addition to providing shading to the balcony below, they provided a “sense of enclosure,” in Farrelly’s words, as “it gets quite blowy there.” The gables themselves are extended 2 metres, providing shade to east and west. The overall look satisfied the planners to such an extent that the scheme was passed without going to committee –

“It’s quite unusual to get a delegated decision in a Conservation area for a major project,” Farrelly says.

The route to CLT

The client and architect had a strong desire to use a full CLT frame rather than precast or steel for the project, not only for its sustainability credentials but also because of its construction efficiency and acoustic benefits. Ashwin Halaria of structural engineer Symmetrys comments:

“Because the CLT is manufactured in the factory, it can be put up very very quickly.”

“really gave us the opportunity to think about how we were going to build this, and how quickly we could turn it around. It made sense to really explore the structural options, and with the client wanting to build it as efficiently as possible.” Farrelly adds, “We thought about CLT early on so we wouldn’t have to post-rationalise the design.”

Symmetrys did a comprehensive, ‘holistic’ cost/benefit analysis on the options, looking at concrete frame, light gauge steel (LGS) and CLT, and in the end came down to a choice between precast and CLT, discounting steel. Halaria explains:

“If you just consider the bare cost of the frame, LGS would have been the most cost-efficient. However, when you start to look at it in detail, such as the amount of steel you would need to achieve the spans, and also cost of fireproofing and soundproofing steel, you understand the benefits of each system better.”

Symmetrys, with assistance from the quantity surveyors PMP, estimated that the additional cost of fireproofing and soundproofing an LGS frame in this case would have been around £200,000, which Halaria describes as “quite phenomenal.” In addition, there was the weight issue:

“Both LGS and CLT frame are very light, but with LGS you are using concrete floors so it’s a heavier frame overall.” And due to the limitations on spans, “there would be a lot of hot rolled steel to get it to work, essentially it would become a standard steel frame infilled with LGS.”

“The very helpful thing they did was to look at that cost/benefit matrix, which allowed the decision to be made. If you look at the bigger picture, it’s actually cost-neutral.”

Symmetrys identified a further reason why steel frame, despite its familiarity for contractors and ability to provide large spans, wasn’t the ideal solution. The need to bring in a crane would have involved a “high level of site activity in a sensitive local environment.” On other hand, as witnessed recently by Halaria on a CLT housing project in London’s Elephant & Castle by Eurban (Trafalgar Place), fast progress can be made using just a few staff on site.

“There was a team of five rapidly putting up a big building, as it’s so efficient.”

Farrelly comments: “We wanted CLT for the energy advantages of the material, but also its speed – we could get this thing water-tight really quickly.” He does offer a note of caution however, saying “We’ve used CLT in the past where it has been brought in too late in the day, and there has been a lot of steel thrown in to make the spans work.”

Halaria summarises why CLT finally won out over a twin-wall precast option – weight of precast being one factor, but the deal-breaker being the roof:

“The thing with precast is while it would go up as quickly as CLT, the precast units couldn’t span to the ridge to form the roof, so you’d have to bring in steelwork which is another trade on site.”

“CLT on the other hand could go top to bottom without any other trades, apart from forming the reinforced concrete slab under the ground floor.”

This was the deciding factor for the client, who was determined to find the most efficient solution to delivering its tight programme. CLT is also a sustainable material, and would achieve a saving on the transfer structures required and the substructure due to being lighter than traditional construction methods. Moreover, due to its robust nature, most party walls can be installed as part of the main frame.

Despite this Halaria acknowledges the “strong credentials” of precast, with its efficient factory-constructed, slotted-in units, and admits that there is still some steelwork in the design, such as within the balcony construction. However, The Fitzroy’s frame is completely CLT from the ground floor to the roof, including the staircases.

Farrelly says that using CLT has enabled the architects to “really optimise the apartments in terms of stacking, and also the width of party walls.” He says that a key goal was to “drive as much repetition in the apartments as possible” for efficiency, to enable living rooms and bedrooms to be stacked (in addition to bathrooms and kitchens), and ease transfer of services.

In terms of the design benefits for this project for users, he says:

“Most retirement homes in the UK to date have been very conventional in terms of design, layout and construction. On this project, thanks to the less complex floor zones with CLT, we will have higher ceilings whereas with steel we would have had much more complicated services distribution meaning lower floor to ceiling heights.”

Farrelly and Halaria agree that one of the challenges of CLT, despite its efficiencies, is that in terms of services it makes it essential to finalise distribution layouts through walls early, as modifications later on are tricky. Halaria explains:

“We are talking about large service holes here – where are the main distribution runs going to go?”

The main learning issue, he says, is coordination of M&E with the design of the frame, so that the designers understand where all the ducts need to go –

“it has to be fully coordinated in advance. With a concrete frame you have a slab, service risers and then take your ducts wherever you want them.”

Cormac Farrelly admits that there were mixed feelings within the project team when CLT was initially mooted, with some having had “bad experiences in terms of cost, and some people just being nervous of new technologies.” However, the overall drive to prove the case for the material from client, architect and engineers won through: “We worked really hard to bring it in,” he says.

Having worked with PegasusLife previously, he is confident that if the efficiencies and cost work out as planned on this Falmouth scheme, more CLT projects will follow.

“It has been a sharp learning curve for everyone, and it was interesting to know what the CLT supplier couldn’t do. It’s been an interesting learning experience working out what we are responsible for as engineers, and what they are; each supplier works very differently.”

He admits that most contractors in the UK are risk-averse, and won’t volunteer to build in CLT:

“It’s a matter of trying to change people’s thought patterns and get them to understand the benefits it could bring to their process. It’s still something new, and the first time it might be difficult, but the second time you learn from that and the third time you perfect it.”

With the design team acting as collaborative partners to an open-minded client in the case, its choice of material was also an informed one. 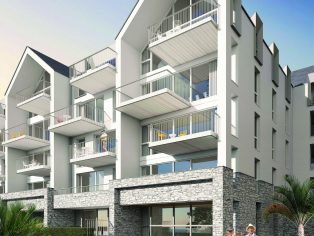 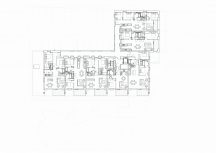 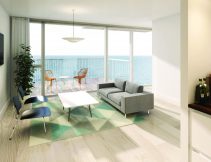 As well as providing more space than normal and great views, apartments also have a sense of enclosure and are shaded by the balconies above 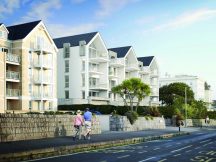 The gabled front elevation is a contemporary take on local Victorian hotels, with open 12 m2 balconies 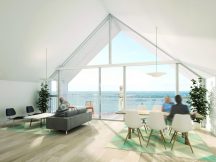 The gables themselves are extended 2 metres, offering shading