Timber covers all the bases

Stephen Toone of canopy manufacturer Fordingbridge describes how timber’s versatility of application and lasting appeal is increasingly seeing it specified.

There is no doubt that timber’s strong sustainability credentials are the material’s key advantage when compared to mainstream building materials such as steel and concrete. It’s no secret that wood supplies, if carefully managed, can be maintained indefinitely and provide a ‘green’ alternative which produces much less carbon during its processing. However it has several other benefits when it comes to specifying canopies.

To have an assurance that the timber has been sourced from well-managed forests, specifiers need to check if the material is FSC or PEFC–certified. FSC stands

for Forest Stewardship Council – an organisation established in the 1990s with the objective to promote responsible forest management environmentally as
well as socially. A global network of environmental, social, and economic members, including the likes of Greenpeace and WWF, has developed a set of FSC standards to protect forests’ biodiversity and ecological processes.

Another organisation, the Programme for the Endorsement of Forest Certification (PEFC) – a global not- for-profit body – uses independent third- party certification to promote sustainable forest management. PEFC remains the certification system of choice for small and non-industrial private forests.

While sustainability may be a key reason for choosing timber, it’s the material’s appearance, which can lock in a rich colour range and surface textures, that tends to be a deciding factor for specifiers wishing to add a sense of warmth to a structure.

This is also helped by timber’s perceived tactile qualities, which are in contrast with the ‘coldness’ of steel, for example.

In the world of large-span canopies and buildings, it has been established that using glulam (glued laminated) timber holds many benefits, including strength, flexibility or fire resistance, which offers high design freedom to architects. Glulam timber has been specified on a range of landmark projects, such as the entrance canopy on the D1 Tower in Dubai. In the UK, a 42 metre-high arched glulam timber structural frame is the standout feature in Veolia’s waste to energy and recycling facil- ity in Leeds. The structure, which is 125 metres long and 35 metres wide, is one of the largest facilities of this type in Europe.

These two schemes alone are a testament to glulam timber’s widespread application and the material’s many benefits.
Beyond the aesthetics, glulam timber is extremely reliable and very adaptable in design; however, specifiers need to be aware that the material’s durability depends on specification, particularly with regards to the species of timber, type of glue and preservative used, as well as the application itself.

Timber also has a superior strength to weight ratio compared to steel and concrete. Comparing equivalent beam sizes for the same load bearing capacity in glulam and steel, glulam has up to twice the strength to weight ratio of steel. This would mean smaller foundations would be needed for a reduced structure weight, resulting in shorter installation periods, reduced foundation loads, and ease of erection.

As a well-established and versatile material, the longevity of glulam timber has long been recognised – according to the Glued Laminated Timber Association,
there are documented examples of its use around 200 years ago, while a number of structures that were erected more than 150 years ago are still standing.

There are further performance advantages, established through carefully prescribed design procedures backed by practical tests, to ensure structural fire resistance. Large section timber elements perform very well in fires due to the fact that timber chars at a known rate and does not deform.

Fire performance of glulam has been the subject of extensive research and structural glulam members can be designed to last a certain period of time based on the rate at which it chars. Additional fire protective finishes can be used to further increase the fire performance.

Glulam timber’s proven resistance to corrosion and its ability to withstand harsh climates and exposed environments means the material can be trusted to stand the test of time. As timber doesn’t rust or spall, it can be safely specified for schemes across coastal regions. The material can add an unrivalled ambiance to garden centres when used for canopies, while specifying timber for school canopies can contribute to a ‘soft’ appearance of the outdoor spaces. 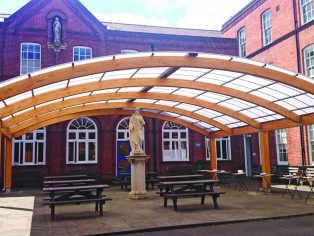