Thistle Windows rounds off the year with another success

Long-standing Network VEKA member Thistle Windows and Conservatories has been named ‘Conservatory Installer of the Year’ at the highly respected G15 Awards.

The hard-working Aberdeen-based team were delighted to win the award in the same year they celebrated the company’s 20th anniversary!

Ian said, of the win:

“We are incredibly humbled to receive this award, it truly is testament to the hard work of our amazing team. We are a company that has always endeavoured to go the extra mile for our customers and to be judged as the best conservatory installer in the entire UK is an achievement we will always be extremely proud of.

“Despite operating in a challenging economic climate, the company continues to grow and we will be moving into larger premises in the New Year. Our new plant will be nearly three times the size of our current location, allowing us to better service the ever increasing customer demand that has shaped us into the award-winning firm we are today.”

Network VEKA MD John Ogilvie was quick to praise the Thistle team for all their hard work:

“As a long standing VEKA fabricator and proud Network VEKA member, we are well aware of Thistle’s exceptionally high standards! However, it’s always nice to see our customers recognised and congratulated by the wider industry. We’re very pleased to see them celebrating so many milestones in such a short space of time: a 20 year anniversary, a big award win, and a move to much bigger premises! We look forward to seeing what they have in store for 2016.” 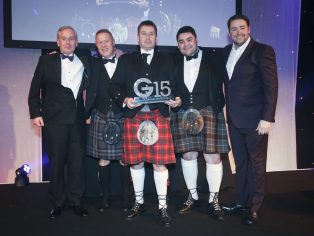