The Structural Awards 2015 Shortlist: The Amazing World of Engineering

The shortlist for The Structural Awards 2015 is released today by The Institution of Structural Engineers, celebrating the extraordinary achievements of structural engineers around the world.

Structures from 13 nations are recognised, including the tallest observation wheel in the world, a bridge modelled on a Japanese hand fan, a memorial to victims of the September 11 terrorist attacks, and an ‘amphibious’ house. The winners will be announced at The Structural Awards ceremony in London on Friday 13 November 2015.

“This year’s shortlist illustrates the extraordinary scope and beauty of great structural engineering, and the amazing range of abilities engineers have: designing everything from practical, affordable housing for developing nations and spectacular showpiece structures to vital infrastructure solutions and projects to mitigate the effects of climate change.

“This Structural Awards shortlist really recognises the outstanding professionalism and creativity of structural engineers and the profound effect they have in helping to shape our world.”

Positioned on an island in the River Thames, the UK’s first amphibious house can rise up by 2.5 metres, more than enough to cope with an extreme flooding event. The house remains operational during a flood and can be occupied as soon as flood waters recede.

A project to develop an alternative form of permanent, low-cost and appropriate housing for low-income communities in El Salvador. The design blends modern engineering principles and technologies with a traditional construction method, creating a low-tech house design that is immediately familiar to local communities, but with a modern look that makes it very popular.

The Vegas High Roller is the current Guinness World Record Holder for the tallest observation wheel. Standing at 168 metres tall, it is a major new landmark for Las Vegas, and the key feature in a new pedestrian street development in the city. The wheel carries 28 fully air conditioned, spherical cabins.

The Melbourne School of Design was commissioned via an international design competition in 2009. A key element of the brief was the concept that the building itself would teach the students about design, structure and construction. To this end, the design team exposed a number of key structural elements.

This winning design for a footbridge across the Grand Union Canal is the focal point of the new Merchant Square development. The simple and spectacular design sees a three meter wide cantilevered deck raised on hydraulic jacks with an action similar to a traditional Japanese hand fan.

This concert hall is the new home of The National Polish Radio Symphony Orchestra, with capacity for an audience of almost 1,800. Katowice is famed for its Silesian mining culture, and the venue has been designed both to reflect the region’s landscape and heritage (featuring references to the Nikiszowiec district’s brick buildings) and stand as a symbol of modern Poland.

Chongqing is one of the fastest-growing cities in the world, with a population of 32 million. Intersected by two major rivers, the Yangtze in the south and the Jialing in the north, the city held an international competition for two new “Twin River Bridges”. The Qianximen Bridge was one of the winning designs, featuring a single tower shaped like the shuttle of an ancient Chinese weaving machine, to express Chongqing’s history and culture.

The Pavilion acts as an entrance to the National September 11 Memorial Museum in New York, USA. It houses two 80-ft tall ‘tridents’ reclaimed from the original Twin Tower exteriors. The tridents are so huge they had to be installed first and the Pavilion built around them. The structure also features an auditorium and a private suite for victims’ families.

The Singapore Sports Hub is a key project in Singapore’s urban redevelopment and sports facilities masterplan, which promotes a more sustainable, healthy and active society. The Hub provides a unique ecosystem of sporting, retail and leisure spaces, including the new National Stadium – a highly adaptable, state-of-the-art, 55,000 seat sports venue featuring a retractable roof and movable seating.

As part of the forthcoming 300th anniversary celebrations of the Siberian city of Omsk, the city decided to refurbish and renovate Valikhanov Street in the city centre, which cuts through historic parts of the town. The project involved the design and construction of steel and glass “crystals” to be scattered along the street as if by an imaginary “wizard”. 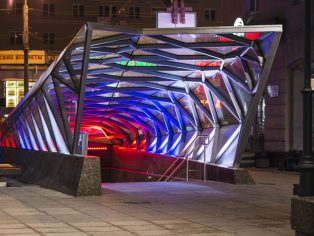 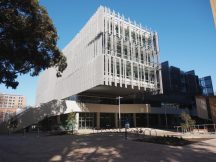