This month, Manuela Carmena, mayor of Madrid, and Norman Foster, president of the Norman Foster Foundation (NFF), inaugurated the Foundation in Madrid by hosting the Future is Now forum.

The forum was held in the Royal Theatre and brought together 1,800 attendees, including 1,100 students from national and international universities as well as members of a rising generation of professionals interested in architecture, art, new technology and culture–areas in which the Foundation is focusing its work. The event was dedicated to advancing interdisciplinary thinking as a means of helping up-and-coming architects, urbanists and designers from various fields anticipate the challenges of the future.

Norman Foster welcomed guests, saying, ’The Foundation is a hub for those who want to change the future. A place for anybody who has something positive to contribute to society, especially the younger generations who want to tackle the major issues of humanity and believe in change for the good.’

Future is Now, held in English and streamed live on the Foundation’s website, was organised in three sessions focusing on Cities, Technology and Design, and Infrastructure. María Nicanor, director of the Norman Foster Foundation, led the event and introduced each session.

The first session, ’Cities,’ included a keynote speech from Norman Foster. Francine Lacqua, editor-at-large at Bloomberg, interviewed Michael Bloomberg, honorary trustee of the Foundation, philanthropist, businessman and three-time mayor of New York City, who said, ’There are problems with living in cities but the solutions are there too. We need leaders to say this is where we are going to go and I’m going to explain to you why we are going to go there. Norman Foster is this kind of leader.’

In the discussion that followed, architect and artist Maya Lin advised the audience to ’never stop learning. Stay curious. Think outside the box. Think holistically.’ Richard Burdett, professor of Urban Studies at the London School of Economics said, ’Many schools don’t teach students that they need to work together. They are siloed. That is part of why this Foundation is so important.’

The second session, ’Technology and Design,’ began with a keynote speech from Matthias Kohler, professor of Architecture and Digital Fabrication at the Swiss Federal Institute of Technology, who spoke about changes in how people make and build things. Gillian Tett, U.S. managing editor atThe Financial Times, interviewed Jonathan Ive, chief design officer at Apple and honorary trustee of the Foundation, who discussed his inspiration and view of the world, saying, ’Dismissing ideas too quickly is dangerous. Over the past 25 years, I think one of the things that we’ve learned is how profoundly important an idea is and how fragile it is but how over the course of development it can become so powerful. It worries me how easily an idea can be compromised in its infancy.’

Also taking part in the discussion were Niall Ferguson, a senior fellow of the Hoover Institution, and Nicholas Negroponte, co-founder of MIT Media Lab and member of the Foundation’s advisory board, who had opposing outlooks on how technology will impact the world. Ferguson warned, ’Major technological innovation always has different impacts than intended,” while Negroponte stated, ’Soon we will be able to do what nature does. We will design buildings by planting a seed in the ground and it will grow from the ground up. We will do it as well as or better than nature.’

Marc Newson, designer, and professor in Design at the Sydney College of the Arts; Neri Oxman, architect, designer and founder and director of Mediated Matter Group at MIT Media Lab; and Patricia Urquiola, designer, architect and founder of Studio Urquiola, continued the discussion, exploring digital technologies, artificial intelligence and the interaction between technology and humanity.

In the third session, ’Infrastructure,’ the keynote speech was given by Alejandro Aravena, executive director of Elemental and winner of the 2016 Pritzker Architecture Prize, who spoke of the inequality in cities and the idea that infrastructure can help even the field.

Christiane Amanpour, chief international correspondent for CNN, interviewed Henk Ovink, special envoy for International Affairs for the Netherlands, who stated that “if as a decision maker, if you cannot include everyone at a local level, your initiatives will fail. Inclusion is a critical driver of change.’

Participating in the discussion were Luis Fernández-Galiano, trustee of the Foundation, professor at Madrid’s School of Architecture, ETSAM, and director of the journals AV/Arquitectura Viva; Jonathan Ledgard, director of Rossums Group, founder of Redline, former director of Afrotech and member of the École Polytechnique Fédérale de Lausanne (EPFL); Mariana Mazzucato, director of the Institute for Innovation and Public Purpose at University College London; and Janette Sadik-Khan, director of Transportation at Bloomberg Associates. Sadik-Khan spoke about the importance of having a vision and moving quickly so that people believe in the possibility of change.

In the event’s closing conversation, artists Cornelia Parker and Olafur Eliasson spoke of the necessity of interdisciplinary interactions in inspiring people to make social change.

About the Norman Foster Foundation
The Norman Foster Foundation (NFF) promotes interdisciplinary thinking and research to help up-and-coming architects, designers and urbanists to anticipate the future. The Foundation believes in the importance of connecting architecture, design, technology and the arts to better serve society while placing value on holistic education that encourages experimentation through research and projects.

Since 1999, the Norman Foster Foundation of London has offered annual scholarships through the Royal Institute of British Architects (RIBA) to provide students and researchers of architecture the opportunity to travel anywhere in the world and carry out research projects around the future of cities.

The Archive constitutes the core of the Foundation.  Created in 2015, the Archive is responsible for the conservation and dissemination of the architectural records of Norman Foster. The Archive’s holdings span the 1950s through the present day. Students, researchers and the general public can access the Archive online through an open database on the Foundation’s website. 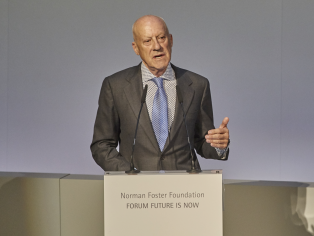