British Land and Oxford Properties have announced practical completion of The Leadenhall Building, a stunning new addition to the London skyline demonstrating state of the art construction and extraordinary craftsmanship.

Standing a statuesque 224 metres tall with 46 floors, this building provides the highest offices in the City of London. Developing ideas that can be traced back to Rogers’ and Arup’s early collaborations from the design of the Centre Pompidou in the 1970s, in Paris, The Leadenhall Building is an unashamedly ambitious exercise in architectural engineering. Furthermore, with approximately 85% assembled off site, this project has achieved unprecedented levels of pre-fabrication for a high rise structure in the UK.

An innovative, exposed steel braced “megaframe” structure placed outside the cladding wraps around the building’s tapering shape, a form driven by the need to maintain protected views to St Paul’s Cathedral whilst maximising development potential. The resulting asymmetric profile presented complex challenges for our structural engineers. The building has a natural tendency to lean to the north, as the majority of the vertical load is offset from its centre.

“A novel active alignment method developed in partnership with Laing O’Rourke compensates for the building’s lean by shortening the megaframe diagonals on the east and west faces. This effectively restores the building to its true vertical alignment”.

The external megaframe also avoids the need for a central structural core; therefore even the largest floors have no more than six internal columns creating multifunctional and flexible workspaces.

From its inception, the building has been designed to be highly energy efficient. A naturally ventilated triple glazed cladding system limits the amount of solar gain and heat loss passing through the building façade, whilst maximising the availability of natural daylight.

“Each tenanted floor is provided with its own ventilation system and hydraulic separation of the heating and cooling systems that allows for a highly flexible office accommodation. The systems allow tenants to be in direct control of their energy demands by allowing them to choose occupancy times, cooling loads and ventilation rates”.

Unlike most office buildings the lifts are not buried out of sight deep inside a solid concrete core. The lifts are creatively expressed as a major architectural element in the North core, leaving unobstructed floorplates at every office level. The twenty passenger and two goods lifts provide an ever changing pattern on the façade, introducing a new dynamic for passers-by in the city to experience.

“Every element of the lift installation has been painstakingly detailed by the architect and engineering team to withstand the closest scrutiny both from outside and within the building. These are the fastest glass lifts in the world and provide passengers fantastic views over the city as they rise above the surrounding buildings”.

At street level the building is opened into a vast area of public space, which is seven-stories high and framed by the megaframe steelwork with just six columns and six suspended escalators passing through. This open space is unusual for buildings of such height, which at ground level tend to be private spaces with only receptions, lift lobbies, and other ‘out-of-bounds’ areas.

“Unlike its other tall neighbours in the city, The Leadenhall Building is able to clear the ground floor since it requires no central core for structural stability. This is instead provided by the steel exoskeleton, or megaframe, which wraps around the building’s perimeter. Finally, by hanging the lowest floors and escalators, instead of supporting them from below, further columns are avoided providing an even more generous space for the public”.

“The visibility of the engineering is a reflection of the architectural expression and it is almost impossible at times to decouple the two disciplines. As the building tapers, the ‘attic’ levels have been designed to incorporate generators, cooling towers, boilers, pipework and a myriad of other services into a diminishing footprint. The glazed attic is again a visible expression of form and function working symbiotically”.

As this new addition to the city skyline reaches Practical Completion, The Leadenhall Building is destined to create a spectacular urban experience for visitors, workers and Londoners alike. 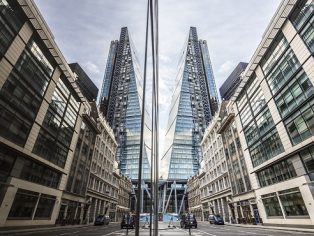