The Independent Hotel Show returned to Olympia West on 21st and 22nd October 2014 for two days of networking and new product launches, a multitude of ideas, innovation and inspiration, and an influential gathering of hotel owners and esteemed hotel industry experts.

Now in its third year, the Independent Hotel Show is firmly established as the must-attend event for anyone involved with the hotel and hospitality industry. A one-stop-shop of premium products and services, the event prides itself on offering a stellar line up of industry experts to tackle, discuss and digest key issues within the sector, predict trends and advise on best practice.

Together with the Innovation Stage, sponsored by MICROS, the targeted seminars and business sessions across the two days proved an incredible draw for visitors, often with standing-space-only crowds.

“It’s clear to see that visitors to the show are passionate about the market to which they belong and it’s been fantastic to be associated with these industry leading seminars.”

“People come to the show wanting to listen, to take in new ideas and spot new trends. It attracts people in search of innovation and the seminars are always packed, which demonstrates this.”

Showcasing a handpicked range of luxury goods and services aimed at the boutique hotelier, the Independent Hotel Show is known for featuring the cream of the crop. Exhibitor categories include interior design, technology and software, audio and entertainment and health and wellness.

“The show brings inspiration, knowledge and a platform to show all the latest products under one roof. It’s been an exciting venue to launch a new range and has been great in drawing in people to our stand.”

Pivotal to the show are the awards, which celebrate inspirational leaders within the industry and culminate in an awards ceremony on the first evening of the show. Kit and Tim Kemp of Firmdale Hotels scooped Independent Hotelier of the Year for their stylish and design led influence on the boutique hotel scene. Meanwhile, The Pig on the Beach in Dorset beat stiff competition to be crowned Outstanding New Independent Hotel of the Year.

Central to the exhibition area was The Hub, a networking focal point designed by Nina & Co in collaboration with Anya Fennet. With over 10 years’ experience in creative design for large hotel groups, the pair developed The Hub in response to the Independent Hotel Show’s competition brief to develop a space in which to create that ‘light bulb moment’. The pair have been overwhelmed by the response to their design, commenting:

“People have been attracted by the openness of The Hub space, enjoying the sense of welcome and intimacy it conveys, whilst still feeling very much at the heart of the show. They have also commended our use of sustainable and reclaimed products, British design and innovative finishing touches.”

A new edition to this year’s show was a breakfast briefing featuring renowned restaurant critic AA Gill, which was attended by over 100 industry VIPs and celebrated guests. Gill was probed by leading social commentator and broadcaster Peter York on his attitudes to luxury, what it takes to lure him out of London and the little touches and attention to detail that can make a hotel guest feel special.

This brand new show takes place at Olympia on 18th and 19th February 2015 and it is the only show dedicated to the UK pub industry. Following the same winning formula as the Independent Hotel Show, PUB15 will showcase premium products, business sessions and seminars targeted at the modern day publican who wishes to raise the bar.

“The Independent Hotel Show has enjoyed tremendous success for the third year, building on its reputation as the event for the independent and boutique hotelier. We’ve received fantastic feedback from exhibitors and visitors alike, with key themes of praise centering on the informal but informative nature of the event and the scale of business and networking that is conducted here.”

“This is a vibrant industry to be associated with and we’re delighted that so many key players see the Independent Hotel Sector as integral to their business. The dates have now been fixed for 2015 and the rebookings are coming in fast. In fact 60% of this year’s exhibitors have already rebooked. Thanks to all our exhibitors and key supporters. We are looking forward to welcoming the sector again next year.” 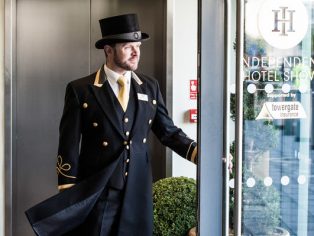