The impact of tiling on health and well-being

Kerakoll takes a look at the impact of tiling on the health and well-being of tilers and building occupants, and how this is being improved by product research and development.

The World Health Organisation Guidelines for Indoor Air Quality (2014) state that “healthy indoor air is recognized as a basic right. People spend a large part of their time each day indoors: in homes, offices, schools, health care facilities, or other private or public buildings. The quality of the air they breathe in those buildings is an important determinant of their health and well-being. The inadequate control of indoor air quality therefore creates a considerable health burden”. The organisation estimates that globally indoor air pollution led to around seven million premature deaths in 2012, and that there is also emerging evidence that air pollution can disrupt human physical and cognitive development. Much of this is down to microbial pollution caused by damp and mould, but building materials also contribute to the burden.

With indoor air quality at least 2 and up to 5 times worse than the air outside, Sick Building Syndrome affects 20% of the western population according to the WHO, causing fatigue, nausea, irritating the respiratory system and a general feeling of malaise.

This is leading to a growing focus on the choice of materials to ensure that the air in the buildings that we occupy is as healthy as possible. Institutions such as WELL, Fitwel and the Institute of Building Biology now offer certification to help demonstrate that buildings are constructed in such a way as to promote the occupants’ health and well-being, in the same way as LEED and BREEAM do for sustainability and ecological impact.

Ceramic and stone tiles by their nature are inert and should not have any effect on the health of building occupants or the people installing them. Concerns about the effects of radon emission especially from granite and slate have been shown to be false. In their report of April 2010, the Health Canada Radiation Protection Bureau came to the conclusion that “generally speaking, building materials used in home decoration make no significant contribution to indoor radon for a house with adequate air exchange.”

In contrast, tile adhesives and grout have traditionally contained volatile and semi-volatile organic compounds amongst the materials used to formulate them and these compounds can have a serious effect on the health of both the installer and the occupants of the building. In addition epoxy resin contained in reactive resin grouts and adhesives can give rise to health problems and allergies in the people using them, and the growth of mould and fungi on grout and silicone may cause respiratory problems, whilst the use of biocides to prevent this growth is suspected of being possibly carcinogenic and dangerous to health. The breathability of waterproofing systems is also an issue, so that they stop water penetrating but also allowed trapped moisture to escape, thus avoiding deterioration from damp which could also cause health problems.

Responsible manufacturers are developing new materials which will enable the industry to break this reliance on harmful substances whilst still manufacturing products that will perform to the extremely high standards required by the construction industry.

The Kerakoll Group continues to invest heavily in research and development on both sustainability and human health and wellbeing. The Group’s R&D facility is housed in the GreenLab, a building that is a perfect combination of cutting-edge technology and sustainable materials, built exclusively using eco-friendly options: an ecosystem that is constantly in balance with the surrounding environment, that produces its own energy, collects rainwater and filters it naturally, thus ensuring the highest levels of indoor air quality and well-being.

The GreenLab contains 9 advanced R&D laboratories which specialise in the development of green technology and research into topics with a direct bearing on the health of the planet and its occupants. These include health & well-being, with topics such as the study of indoor air pollutants and calculation of their breathability indices, research into VOC emissions, the development of bioactive principles for indoor wellbeing, and the development of products with a low environmental impact aimed at reducing CO2 (LCA), as well as natural alternatives to cement.

The Indoor Air Quality Lab has 12 VOC rooms managed via software which are constantly in operation and configured for the Indoortron at the Joint Research Centre in Ispra which belongs to the European Commission. In 2016 and 2017 alone, the lab carried out over 400 complete VOC tests which identified almost 8000 molecules.

The research teams collaborate extensively with respected universities and scientific institutions, including the Department of Dermatology at Modena Hospital Trust on allergy testing, GEV Emicode on the emissions control test, Green Building Council Italy to which they provide consultancy and scientific cooperation for the drafting of the LEED regulations, the French Institute of Construction (SDTB) and the German Institute of Building Technology (DIBt). They also take part in numerous important research projects.

The research has led to the development of some cutting-edge products which use revolutionary new technology, for example highly effective waterproofing agents that still allow the substrate to breathe. Aquastop Nanoflex makes use of a nanotechnology lattice that is 50,000 times smaller than a drop of water but 200 times larger than a molecule of steam to produce an ecologically-friendly liquid waterproofing membrane. The Green-Pro membrane is a 3-layer polymer membrane that provides uncoupling, anti-cracking and waterproofing features in one mat whilst letting residual moisture in the screed escape. Green-Pro is particularly effective when used as part of the Laminate No Crack system in conjunction with Biogel adhesives.

The Biogel range is a new generation of adhesives formulated from gel technology which consists of two powder-form products, one standard setting and the other rapid setting, and a hybrid gel. All products can be used on any substrate even flexible ones. The Kerakoll researchers went back to nature to develop a type of adhesive which would be easy to use, give excellent performance and be kind to both the environment and human health. They identified natural polymers with a low environmental impact and virtually no volatile organic compounds. The material chosen for the powder form gel adhesives has a high ability to re-emulsify and re-disperse in water as well as to hold its shape. It is also extremely compatible with the hydraulic binder used. This natural polymer is a rheological additive that improves plasticity and fluidity and stops the mixture from thickening in the bucket so quickly. To this formulation is added a mineral that is extracted without the use of chemicals, solvents or synthetic post-treatment agents. An added advantage of the materials used to formulate the range is that they are silica-free, avoiding exposure to carcinogens for the tile fixer.

As part of the range the company launched Biogel Extreme, a hybrid gel adhesive that was developed to improve on standard reactive resin adhesives by producing an adhesive that can be used for all internal and external tiling even on the most demanding substrates and installations. What they came up with is an adhesive that bonds everything and has been tested under the most extreme working conditions. Reactive resin adhesives can be very unpleasant to use and bad for the environment due to the nature of epoxy resins. Biogel Extreme is non-toxic and non-hazardous and made from solvent-free organic raw materials. Its carbon footprint is 7.98 kg CO2 eq/m².

Work on next generation grouts has been on-going over the last 10 years. Fugalite Bio is a water-based resin grout range launched in the UK in 2015 that was tested in conjunction with Modena and Reggio Emilia University Hospital and found to be hypo-allergenic, causing no positive allergic reactions in the 200 people suffering from dermatitis tested, compared to the 3% – 3.5% affected by traditional epoxy reactive resin grouts.   In cases where the subjects already suffered from occupational exposure to resins and amines this rose to 12% for Fugalite Bio and 20% – 36% for the traditional epoxy grouts.

The company’s latest grout range is Fugabella Color, which uses a hybrid technology Kerakoll has christened resina-cemento. This is similar to Biogel technology in that it uses natural binders that have been hybridised with dispersible resin binders and other, mainly natural, additives that have very low VOC content, and are safe for people’s health and the environment. Research into new natural substances and natural pozzolan has meant the replacement of the chemical and synthetic additives still widely used in grouts, and the use of bioactive substances to permanently inhibit the growth of mould and bacteria without the use of biocides.

The new materials have not compromised performance: Fugabella Color is suitable for use in a wide range of temperatures and environmental conditions meaning that you can specify the same grout for everything rather than having to choose one that fits the on-site conditions.

The rich, intense colours are due to the particles used in the grout. They maintain the depth of colour and don’t fade as resin-cement grout is not subject to salt and lime efflorescence, due to the absence of Portland cement. It remains workable without changing consistency in the bucket, so there is no need to add water which can lead to colour inconsistencies.

The purity of the materials employed along with the use of specific natural additives gives reduced water absorption, lower levels of joint staining and complete protection from common acid pH substances. A revolutionary bonding system gives superior resistance to abrasion of 425 mm³ for Fugabella Color after 72 hours compared to 970 mm³ for a cementitious grout.

The holy grail of specification is to find products that provide excellent performance at the same time as not harming the environment or raping the world’s resources, and that promote the health and well-being of both the people working on the construction of the building and its future occupants. Responsible building chemicals’ manufacturers, such as Kerakoll, are not just paying lip service to this aim, but actively working to make it possible to achieve. 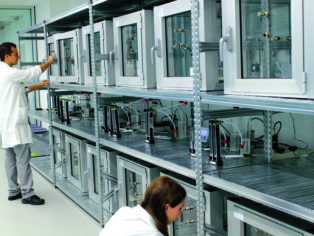 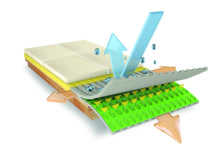