A Grade II listed building at Brixton Prison has been converted into a high end restaurant run by some of its prisoners. Architects Purcell secured planning and listed building consent for the scheme last year and the newly refurbished building officially opened to the public on 27th February 2014.

The new Clink restaurant is situated in the centre of Brixton prison in the Grade II listed former Governors House. The three-story building has been fully refurbished and its ground floor now accommodates a 100 seat restaurant linked to a new professional kitchen in an adjacent building, a private dining area seating up to 24 guests and a meeting room for up to 10 delegates. The two floors above provide a further three rooms for business meetings, including a suite ideal for larger meetings with breakout space and private kitchen.

The former Governors House dates back to the early 19th century and is The Clink Charity’s first restaurant in a listed building. Octagonal in form, the brick building once overlooked the prison’s airing yards. In recent years it served as storage and administrative space.

Brixton’s Clink restaurant is the third training restaurant to be set up by The Clink Charity. The Charity’s restaurants implement a five step programme to educate and equip prisoners with the skills to take up employment on their release and are reliant on donations and income from diners. The first Clink restaurant opened in May 2009 at HMP High Down in Surrey and a second was established at HMP Cardiff in September 2013.

The restaurants have become extremely successful, in terms of offering rehabilitation and training for prisoners as well as proving popular with the public. Her Majesty’s Prison Services (HMPS) is supporting The Clink Charity in their bid to set up 10 Clink restaurants by 2017.

“Working on this project at HMP Brixton was a fantastic opportunity to showcase the work Mitie are undertaking as part of a successful TFM contract on the wider MoJ Estate. We have proven the flexibility of Mitie as a TFM provider to successfully deliver major project works whilst engaged in all facets of the routine maintenance.”

Before the fit out could commence, many of its unsympathetic services, partition walls, suspended ceilings and decoration were removed to reinstate the building’s original floor plan as much as possible. The result is a light and open restaurant area, which has been furnished with contemporary fixtures and fittings made by prisoners from HMP Frankland in Durham. Externally, any damaged brickwork was repaired and the clock on top of the north elevation has been restored.

Work on site took four months, though there was a short setback as the project approached practical completion in early February. Due to heavy rainfall, the roof collapsed flooding the interior. Fortunately the damage was minimal and the contractor was able to respond quickly and reinstate the affected areas.

“The Clink Charity is playing a very active role in the rehabilitation and training of prisoners while at the same time is benefitting the wider community by introducing new restaurant facilities. The Clink restaurant at Brixton prison has given new purpose to what was an underused listed building and I hope this will encourage other prisons to consider the alternative uses for their existing building stock.”

“The transformation of the Governors House is really quite remarkable. The restaurant, meeting rooms and private dining area are something that you would expect to see in central London, not in the centre of Brixton prison and something we are hugely proud of. Not only does the transformation of the site mean we can continue to expand our programme to reduce reoffending, training and releasing qualified ex-offenders into the hospitality industry but it means we can also change the general public’s perception of rehabilitation programmes.” 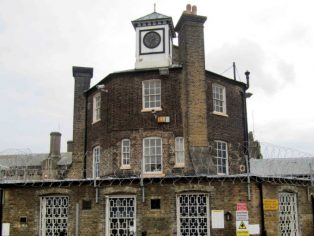