The best new public library of the year is Australian

Australia has the best public library if what counts is architecture and interplay with the local area. In Lyon (France), the Danish Agency for Culture has now announced the winner of the international architecture prize: Schmidt hammer lassen architects – Public Library of the Year Award 2014. The winner is Craigieburn Library, Hume City, Victoria, Australia, designed by architect Francis-Jones Morehen Thorp. The committee of judges concluded that “the new library building is a brilliant and dynamic platform for the future development of living culture and knowledge and the good life in the city of Hume.”

The prize, which was established by the Danish Agency for Culture and sponsored by the Danish architecture firm schmidt hammer lassen architects, was awarded at the annual meeting of the IFLA (The International Federation of Library Associations and Institutions).

The award is a part of the Model Programme for Public Libraries project of the Danish Agency for Culture and Realdania, which has motivated municipalities to develop the library of the future, so that it is prepared to incorporate, among other things, digital developments and local culture and accommodate diverse population groups with an open and functional architectural expression in balance with its surroundings.

Democratic meeting place
Four libraries from England, Australia, the Netherlands and Denmark, respectively, were nominated. The committee of judges justified its choice of Craigieburn Library because, among other things, the library:

“distinguishes itself as a significant modern construction with a strong, recognizable architectural concept…. with its open and flexible space, the library creates a democratic meeting place, open to diversity and interaction…. is a good example of how the City of Hume has used a library to create a sense of belonging for all demographic groups as both a learning centre and a gathering place for the city.” 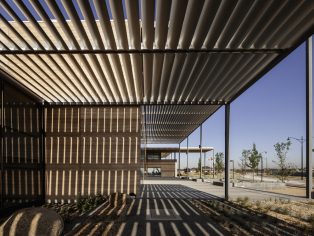