The Architects’ Journal (AJ) has announced the winners of the annual Women in Architecture awards at a ceremony at London’s Langham Hotel.

The awards celebrate the women who are leading the architectural industry, and create much-needed role models for women in the profession. The awards ceremony is being attended by leading architects including Zaha Hadid and Patty Hopkins.

The winner of the Woman Architect of the Year is Francine Houben, the influential designer of the Library of Birmingham. Houben is the founder of architecture practice Mecanoo architecten and has received widespread acclaim for the Library of Birmingham, one of the most high-profile UK-based buildings of the last year. Houben is currently working on the HOME Art and Culture House in Manchester and a housing scheme for the University of Cambridge. The judges praised Houben’s ability to ‘combine that leadership role with the highest quality of architecture’.

The prize for Emerging Woman Architect of the Year is awarded to Julia King, a ‘truly inspiring’ young British-Venezuelan architect focusing on urban development. King designed and built a sewer for low-income homes in New Delhi and is working on the regeneration of a major drain in India that runs through slum areas, as well as studying for a PhD at London Metropolitan University and establishing a practice in New Delhi and London. The judges felt that she ‘came across as someone who is very driven, very smart and very capable of getting things done often in very difficult circumstances’.

The Jane Drew Prize for lifetime contribution to architecture is presented to the family of Kathryn Findlay, the ‘hugely brilliant’ architect who sadly passed away on 10 January, the day that the award was announced. Findlay is best known for her organic structures such as the Truss Wall House in Tokyo, Soft and Hairy House, also in Tokyo, Poolhouse 2 in the Chilterns and, most recently, her work on the ArcelorMittal Orbit tower in London’s 2012 Olympic Park.

The AJ Women in Architecture Awards were founded in 2011 to raise the profile of women architects in a sector where women still face an alarming degree of discrimination. These female architects have succeeded in a difficult environment, as revealed in the results of AJ’s annual Women in Architecture survey, released simultaneously, and highlighting widespread discrimination and unequal pay in the profession.

‘It gives me great pleasure to reveal the deserving winners of the AJ Women in Architecture Awards 2014. Both Francine Houben and Julia King are achieving great things, blazing a trail for aspiring female architects and inspiring us all with their drive and passion. The contrasting work of Francine and Julia epitomises the huge variety of projects that architects can influence, and the positive effect architecture can have on our everyday lives.

‘It was with a real sense of sadness that we announced the winner of the Jane Drew Prize for lifetime achievement, having only just learned of Kathryn’s death. Kathryn Findlay is widely recognised as one of the most brilliant minds in architecture, and I hope this award will assure her place in architectural history. I’m proud that this award, which is one of the few in the industry to celebrate the work of an architect across their whole career, has been awarded to such a deserving person.

‘I hope that the AJ, through these awards, will continue to shine a light on the incredible talent of women architects, and encourage and inspire the women coming up behind them.’

The 12-strong jury included Doreen Lawrence, founder of the Stephen Lawrence Charitable Trust, Woman Architect of the Year 2013 Eva Jiřičná, and Laura Lee, chief executive of Maggie’s Centres. Eva Jiřičná said she found the judging “absolutely amazingly interesting and astonishing” and commented that she is “full of admiration for how many bright women there are and we somehow are not aware of it,” with fellow judge Moira Gemmill, director of design at the V&A adding:

“We are much more aware of the increased profile of women in architecture over the last three years, and it is largely down to this sort of initiative”. 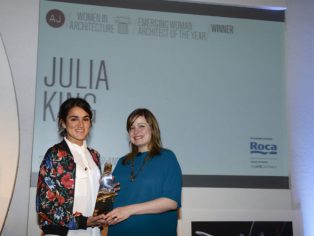