Designed by Birmingham based architects, Webb Gray, the EIDC’s steel frame curtain-walled structure provides 60,000sq.ft of office space for around 600 staff and was built by BAM Construction on a 3.85 acre green field site.

Supplied and installed by Encasement, the column casings are used throughout the building on each of the three floors to conceal structural supports in the six extensive open plan office areas together with separate conference and presentation rooms and the ground floor restaurant.

Manufactured from 3mm thick aluminium and standing 3000mm high, the 530mm diameter ‘Forma’ casings also incorporate an acoustic lining to help dampen noise and reverberation in the office areas. They are also finished in a white PPC coating to integrate with the interior design and reflect natural light.

While some of the casings are positioned around the perimeter of each floor, adjacent to the glazed facade, many have also been integrated into the design and construction of the interior workstations, storage facilities and desktops, with cupboard units and meeting tables being built around them.

In some locations, the lower half of the column casings are concealed by modular cabinets and integral desks, while in others, the storage and drawer units are designed to be slightly narrower than the column casing diameter, leaving the full height visible on either side, giving variety to the interior layout and adjacent meeting areas.

Encasement also supplied and installed a series of semi-circular column casings, which are used in individual offices and meeting rooms where the structural steelwork forms part of the partition wall.

“As Tata Technologies is a global leader in engineering services and outsourcing, as well as being part of the group that owns Jaguar Land Rover in the UK, they invariably demand high standards, so we were delighted to be awarded this project. Every aspect of the building’s design and construction exudes quality, which is particularly visible in the intelligent way our column casings have been integrated into the office furniture and work areas.” 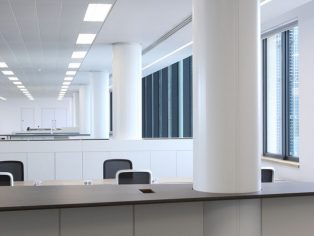