Swapping life in the city for country life

Kevin and Elise Meers were faced with a dilemma. Do they settle for a house in the perfect location and extend it, knowing it will never be right? Or, do they knock it down and simply start again and make it right for all the family?

“We’d looked at a couple of Potton places before and I suddenly thought about a self-build,” says Kevin.

Starting with a blank canvas provided endless possibilities in terms of design, styling and layout.

Kevin and Elise met with self build expert Richard Hall at Potton.

“We talked about the things we wanted out of a house; like four bedrooms and a big kitchen. We discussed what we wanted each room to do and be; we looked at different styles, talked about the plot and the size,” says Elise. “And, of course, there was Maxwell and Tilly’s dream bedrooms to take into account!”

“At the end of the demolition process we got about £200 for the copper pipes and that was it,” says Kevin, who adds that Potton’s support and reputation were an enormous help.

The couple used Potton’s design team to draw up the plans for the house and take the blueprints through the planning process. This service cost just £3,000 + VAT and included all the architectural drawings required to get a designed tailored to the family’s needs, get them the planning permission to build and once built, covered the cost to submit the building regulations application for approval.

“We were complete novices when we started,” says Elise.

As Elise and Kevin project managed the build themselves, they took on the responsibility of hiring subcontractors – and here too, Potton was a huge help, with its database of tried and tested tradespeople.

Kevin and Elise were able to save money by undertaking much of the unskilled labour themselves – in particular insulating the walls, oiling the doors and woodwork from skirting boards to bannisters – and decorating.

Six months after starting the build, the family was able to move into their fabulous new barn-style property designed specifically for them.

“I adore my house,” she says. “I’m a very analytical person and thought everything out down to the furniture and where it would go, played with the footprint at the design stage and made sure the floor space was exactly right. It suits us down to the ground.”

“Would we do it again? Well, it would be a real struggle to get me out of this house but if the perfect plot turned up and the opportunity arose, yes, we would,” she smiles. 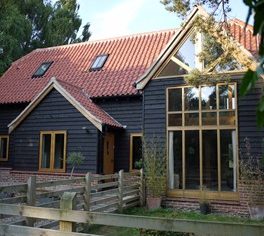 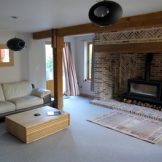 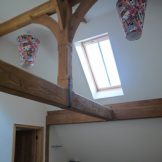