Mike Honour Windows worked with Fairhurst Ward Abbotts, the specialist conservation contractor, carefully to remove the windows, many of which were large and made up of multiple units. This process involved numbering and labeling each window so that it could later be reinstalled into exactly the same position.

All the windows were taken to the workshop at Mike Honour Windows and renovated over an intensive three-month period. Many were corroded, especially along the bottom rails, since they had been installed before the days of galvanizing. To take the surface back to bare metal, each unit was shot blasted. In line with conservation principles, as much of the original steel as possible was retained but, where the corrosion was too great or pieces were missing, replacement sections were inserted. Luckily, the original windows were made using standard F7 sections which are still readily available. Consequently, the missing bars could be replaced relatively easily by being welded in and ground back.

Along with the windows, the ironmongery, including handles and stays, was carefully salvaged and renovated. Where repair was not possible, replicas were made. Many of the windows had deliberately been installed above head height to avoid people peering into the building and possibly seeing the codebreaking secrets inside. This made opening the windows difficult so permission was granted to change some of the fittings to cam and pole operation. To achieve this, a local ‘lost wax’ engineer cast brass copies from one of the original cam stay openers.

Once each window unit was complete, it was hot-dip galvanized. A high quality polyester powder coat finish was then applied in a colour carefully matched to exactly the original bright green of the war time period.

The refurbished windows were reinstalled into the Block C building by the team from Mike Honour Windows. Rather than the glazing being fitted with silicone as is normal today, each pane of glass was face puttied into the metal frame in the traditional way from outside.

“Mike Honour Windows helped instruct our people in the careful process of taking the windows out. It went very well and they were well organized and professional in what they did. The finished windows look good.”

For further information on the Steel Window Association, please visit www.steel-window-association.co.uk or call 0844 249 1355. 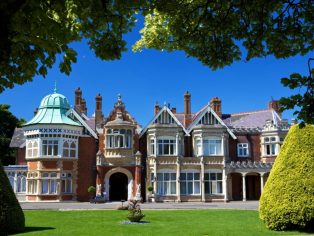