Thirty five projects from around the world have been shortlisted for the prestigious 2015 Surface Design Awards.

The Surface Design Awards recognise examples of progressive design and the use of innovative surfaces in projects both in the UK and internationally. This year 40% of the finalists are projects from outside the UK covering 11 different countries. The highly respected Awards launched in 2013, have grown both in stature and number of entries. Surface Design Awards 2015 saw an unprecedented number of entries, totalling over 180 – an increase of 62% from 2014.

The panel of judges had the difficult task of selecting the finalists in each category, each of which was filled with distinctive and exciting projects from across the globe. The entries inspired a lively discussion between the judging panel which consisted of Sarah Featherstone of Featherstone Young, Theresa Dowling of FX Magazine, Nicola Osborn of MoreySmith, Adam Richards of Adam Richards Architects, Annalie Riches of Riches Hawley Mikhail, Maria Smith of Studio Weave, Ralph Courtenay of Jonathan Dunn Architects and Sharon Stammers and Martin Lupton of Light Collective. The Awards were divided into six categories with each category divided into an exterior and interior section. Each project was judged on a number of criteria which included inventive use of materials and design aesthetics. The range of projects submitted across the categories was both inspiring and thought provoking. The judges said:

“The wide variety of surfaces was both stimulating and exciting to judge. We had a fantastic time looking through the entries and after much discussion, I am confident that we have selected a terrific range of international and UK projects that that represent the innovative use of surfaces in design”.

The winner of each category along with the winner of the Supreme Award, which in the judge’s opinion stands out for its excellence, will be announced at a presentation held at Surface Design Show 2015 on Thursday 12 February at the Business Design Centre, London. Keep up to date with news on the awards with @surfacethinking #SDAwards 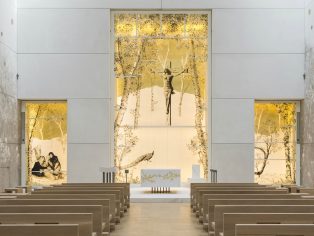