Studio Bark have recently received full planning approval for The Grain House; an innovative, eco-home in the Sussex countryside, and the fifth Paragraph 55 success for the practice. The National Planning Policy Framework (NPPF) Paragraph 55 allows individual countryside homes to be built, provided that they reflect the highest standards of architecture, sustainability and innovation.

The Grain House is a multi-generational family home and a truly landscape driven piece of architecture. The driving force has been the client’s desire to create a profound and unique home in a beautiful setting.

The sculptural form and orientation of a series of monolithic walls takes influence from historic ox-ploughed ‘ridge and furrow’ field patterns, as well as the undulating ridge and valley landforms that characterise the area.

Initial research showed that the site was once part of a medieval glebe, separated into furlongs for strip farming. The direction of these tended strips responded to drainage, giving crops the best chance to thrive. Today the site is used for grazing but hints of its agrarian past are still visible in the form of ancient public way lines and remains of the wooded glebe.

The house itself visually recedes amid the extending walls. Living spaces are partially lowered below the earth creating immersive views of the fields. Planted swathes sit between the lateral walls with meadow flowers and grasses reaching towards the eaves of the green roof, which itself slopes downwards with the natural fall of the land.

Circulation is envisaged as a dramatic procession – residents and visitors pass through breaks in the heavy mass of the walls, guided by light that spills from above. This route introduces a new journey through the landscape, a reference to the ancient right of way beyond that lies almost parallel.

The house is organised in two parts, the main house and an annex, allowing the elderly parents privacy and a degree of subtle separation from the rest of the house. The ‘Annex’, will be fully accessible with its own library and study so that the parents can have private space when desired. The relationship between the two parts of the house is key to the success of the architecture – allowing three generations to enjoy living together whilst not compromising their individual needs.

The elongated plan is staggered from east to west to open up panoramic views and maximise solar gain to certain parts of the home. The narrow plan also maximises opportunities for natural light and passive cross-ventilation.

Views of the home from key points within the boundary and from further afield have been considered in relation to natural topography and building form. Passers-by will experience the building as a piece of land art, which changes in form and proportion as the observer moves through the landscape.

A re-interpretation of the traditional ‘ha-ha’ forms the field edge boundary of the building. In this way livestock can continue to graze up to the front of the dwelling without the visual interference of fences.

As a practice focused on the environment, this proposal is to be environmentally responsible through a careful selection of materials combined with rigorous technical detailing.

The walls are to be constructed from the world’s first carbon negative building block, invented and manufactured by UK company Lignacite. Whilst the environmental credentials of the block are impressive, the block typically has little to differentiate it visually from a regular concrete block. Studio Bark have engaged in a series of enquiries and meetings with the company to develop a cut-face block for external use revealing its aggregate make-up – a first for this product.

The design has evolved as a result of an innovative collaboration with co-located environmental consultants Atmos Lab. By working in close proximity and employing state of the art parametric analysis the team has made strategic, iterative decisions in response to solar paths, drainage and views. 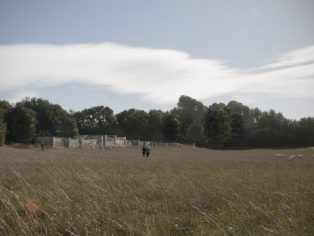 The Grain House by Studio Bark

The Grain House by Studio Bark