The world’s first classroom to be researched, planned and designed entirely by students has been unveiled in Birmingham. And it’s not just a standard classroom – it’s a state-of-the-art science lab.

The team saw their lab design installed at the school after winning ‘Lab of the Future’ – a nationwide competition which saw teams of students submit futuristic science lab designs to organisers Innova Design Solutions – specialists in educational interior design.

The original prize for winning the competition was £20,000 worth of lab furniture to be installed at the school.

However, staff at King Edward’s were so impressed with the students design that they provided extra funding to install the laboratory as part of a full turnkey solution, which included ceiling, lighting, M&E works as well as flooring.

“I don’t think we thought we would win until we had actually won. The whole time we were telling ourselves that it was going to be someone else and that it was a national competition and it was really unlikely we would win.

“We were constantly checking the Twitter feed, seeing what was said and psyching ourselves up to lose and then when we actually won it was just unbelievable!”

The girls beat off competition from across the country with an exceptionally well-thought-through 52-page document detailing end-user requirements, environmental factors, material, equipment, technology requirements and health and safety considerations.

Innova Design Solutions said it was one of the most detailed creative proposals they’d ever seen.

“Some of the labs were getting quite old, we had new labs in mind and wanted to slightly repurpose this room.

“We thought, we can’t have this money for lab furniture and then not do anything with it so, yes, the school did find the extra money to actually be able to refit the lab and pay for the labour and the extra work that was needed to make it a reality.”

The new laboratory incorporates a range of new features including a remodelled horseshoe desking layout, which allows space for the teacher to circulate freely and easily, reducing the lines of communication, pluto power modules at the student desk for easy accessibility and a teacher wall complete with whiteboard, interactive screen and in-built storage to minimise clutter.

“When we launched the competition last year, we always envisaged that the winning lab would actually be built as the prize we offered was for £20,000 of lab furniture. It speaks volumes about the quality of the entry that the school was adamant they needed to fund its completion.

“We’re confident that this is the first instance that pupils have researched, planned and designed their own classroom – and it’s going to be really inspirational. We look forward to seeing the lab in use and hearing about how it performs from the school.” 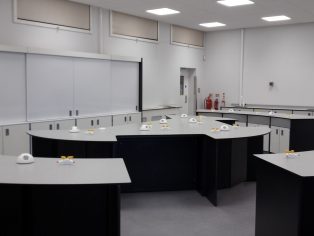 The winning team triumphed in a nationwide competition