Trehearne Architects has delivered the striking transformation of a 1980s office building at 23 King Street, London SW1 – with the presence to attract a blue chip tenant seeking a prestigious headquarters at a heritage address.

Located in the heart of St James’s, 23 King Street provides over 45,000 sq ft of premium Grade A office space over ground and six upper floors. Standard Life Investments appointed Trehearne Architects to transform a dated office building into a high-quality central London HQ, to stand alongside nearby buildings housing companies such as BP and HSBC Private Bank.

Trehearne set out to produce a ‘new’ building, by reconfiguring the property’s internal layout and maximising leasable space. An additional floor was created within former plant room space at roof level, to create seven storeys of high specification office space and an additional 34% of lettable accommodation. The building has been partially pre-let to Temasek, the Singaporean Sovereign Wealth Fund.

“Involving significant structural alterations to the existing property, we have successfully re-designed the façade, reception and core at 23 King Street, resulting in an elegant building, both on the inside and out. The remodelled façade has increased the street presence of the building, and the contemporary reception space has added a new dimension to the building’s personality. Large and efficient floor plates on every level provide flexible and contemporary Grade A office accommodation throughout the building.”

Externally, Trehearne stripped away the post-modern features, but retained the majority of the Portland stone, which has been supplemented in certain areas to create a more elegant and timeless frontage. The glazed entrance was brought forward to add prominence and to integrate the property with neighbouring buildings and with the general streetscape of King Street.

Internally, the obtrusive location of the existing WC core, which divided the T-shaped plan into separate front and rear office accommodation, was removed completely by Trehearne and rebuilt in a more compact arrangement within an extension into the western lightwell. Further extensions to the south-west corner of the site and to the eastern high-level balconies combined to transform approximately 5,800 sq ft of compromised floorplate into approximately 7,800 sq ft of triple-aspect accommodation with flexible, open-plan space.

At roof level, the replacement of the existing VAV mechanical plant with new equipment, much of which was relocated to the basement, enabled the creation of new office accommodation, adding a further 2,300 sq ft in a rooftop-style pavilion, with spacious terraces affording views of St James’s Park to the south. 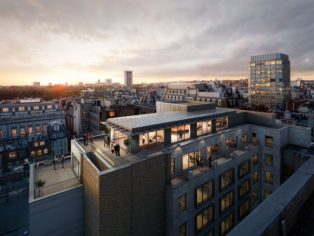