Norbord’s SterlingOSB played a leading role in the construction of a prize-winning display by Welsh garden designer, Robert Hughes, at this year’s RHS Flower Show in Bute Park, Cardiff.

Robert, who specialises in garden design for domestic customers as well as a growing list of commercial clients, designed the garden along with the unique garden office which was central to his display.

Inspired by modern architecture such as Frank Lloyd Wright’s ‘Falling Water’, Robert’s design created a bold and simple contemporary space to provide inspiration, relaxation and the luxury of working from home on sunny days.

Dubbed the “office box”, the centrepiece of the display was a timber, open-air office shelter complete with a green roof, designed as a place to sit, relax or work. The garden and the office box were designed for quick construction and rapid removal after the show; the whole structure was installed and dismantled after less than two weeks.

“We needed a cost-effective, strong material to build with, and Norbord’s SterlingOSB offered the perfect solution,” says Robert.

The Cardiff branch of builders’ merchant, Jewson, sponsored the display and supplied the SterlingOSB free of charge. It was used to build the base of the garden’s raised patio structure as well as wall panels and flat-roof decking for the Office Box itself.

“The office box included a sedum ‘green’ roof so the SterlingOSB had to carry a reasonable load,” comments Robert.

The display was, of course, not designed to last for a hundred years and the choice of materials was limited by a very tight budget. But Robert says that should the Office Box idea take off, any permanent structures will still incorporate some OSB in the design.

“I really like SterlingOSB – it’s easy to work with, it’s strong, light and durable. It’s ideal for something like a flat roof deck structure,” he says. “And I also like the texture of the product. In the right context, it can be very effective as a design feature; you don’t always have to cover it with something else,” adds Robert.

The Office Box design certainly had its admirers, not only among visitors, but also among the RHS Flower Show judges who awarded Robert the coveted RHS Silver-Gilt Medal for his display.

For further information on Norbord, please call 01786 812 921 or visit the company website. 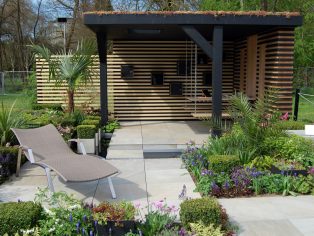