Recognised with an award for excellence in design and construction, Carlton Works is a development of six one-bedroom apartments and a two-bedroom penthouse; these are created within a building built in 1916 when it was known as the New Theatre. To add to the high-end warehouse feel of the development, led by Open Architecture, 28 steel windows and doors of varying sizes were designed and manufactured by Steel Window Association member Govette Windows.

The building on St Johns Hill, in Sevenoaks, Kent, has been much altered over the years and the award from the Sevenoaks Society recognises the latest phase in its life. The former New Theatre reopened as the Carlton Cinema in September 1935, having been extensively rebuilt with a new art nouveau-style façade and seating for 325 in the stalls and 70 in the circle. The cinema finally closed around 1954 and was divided into upper and lower factory spaces.

When the Crawley Building Company bought the building, it was in a dilapidated state. The front facade was demolished and rebuilt in brick while the side and rear elevations were rendered and a modern rooftop extension was added to form the penthouse. Although the building had earlier steel windows, these were in a poor state and their positions unsuitable for the plan of the apartments so new openings were formed to house the windows and doors produced by Govette. Some open onto Juliet balconies.

The windows and doors are manufactured from W20 sections and hot dip galvanised and polyester powder coated in RAL 7021 matt black grey. All are double glazed with 16mm krypton filled units and low E external panes.

For the penthouse, Govette created an internal glazed main door between the hallway and living area. This creates continuity with the other steel windows but the steel was left in its ‘raw’ state, with no galvanising or painting, so it can take on a rusty patina and the welds and other marks are visible.

“The metal window style works well when you’re building warehouse type apartments. I wanted to use local companies and was recommended to Govette. They helped with the drawings and they certainly put their input into the finished design. They did an extremely good job and delivered exactly what they said they would without any problems; I’d definitely use them again.”

Full details of the complete product range, list of members and much more can be found on the Association’s web site at www.steel-window-association.co.uk 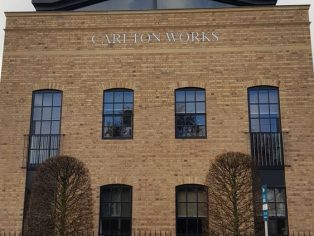