A landmark on London’s Tottenham Court Road, the Heal’s building is Grade II* listed. When it came to a major refurbishment and refit of the upper floors, Steel Window Association member, Associated Steel Window Services, was appointed to undertake the work of assessing, renovating and, where necessary, replacing more than 90 of the building’s windows.

ASWS initially undertook a detailed survey of all the windows involved. These were concentrated on the building’s 3rd and 4th floors and included windows on the Tottenham Court Road facade and on Alfred Mews, which runs along the side of the building, as well as those within two lightwells to the rear. The windows were of varying types and ages as the building had changed and developed considerably since the store was opened on the site in 1854, with the two principal portions dating from around 1916 and 1938.

A total of 70 windows were refurbished which involved repairing and overhauling the frames. Damaged glass was replaced while clear glass was substituted where panes had previously been obscured. Most windows were repaired in situ with the exception of those that had to be removed to allow access to the site. All of the fittings and handles were removed back to the workshop where they were burnished and lacquered; items that were missing were matched and replaced from ASWS’s stock.

Where original windows were damaged beyond repair, or had to be reconfigured to suit changes to the building, such as where smoke vents were required on a stairwell, new windows were installed. In total, 20 replacements were made using W20 sections with 14mm 4-6-4 double glazed units. At the top of some windows, louvres were introduced to accommodate air handling extract ductwork.

On the building’s Alfred Mews elevation, new windows were made for a 17m long bay which projects from the building. This was complicated by the fact that they had to align exactly with internal columns. A further element of the project was the manufacture and installation of W40 section screens, some nearly 8m long, that included doors providing access to a balcony area. These were double glazed with 28mm units.

All new windows were hot dip galvanised and polyester powder-coated while original windows were redecorated by the team from ASWS. This work consisted of applying a spot primer, one undercoat and one gloss coat. The finish throughout was traffic white RAL 9016.

“We relied on ASWS as specialists to tell us what could and couldn’t be repaired. They were incredibly knowledgeable and their expertise was helpful in understanding what needed to be done with the windows.”

For further information on the Steel Window Association, please visit www.steel-window-association.co.uk or call 020 8543 2841. 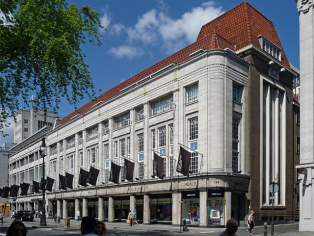