“We are delighted with the opportunity to work on a major public building in France and to reinforce our strong links with Europe. In a time when local libraries and community centres here in the UK are being closed and under increasing budget pressure, the new Metropolitan Library in Clermont Ferrand is a bright example that there is faith in the importance and transformational power of access to literature and culture that our cities and communities need more than ever.”

Stanton Williams’ concept reimagines the 17th century Hôtel-Dieu hospital building and garden as the new shared home for the Clermont-Ferrand Metropolitan Library and its collections. At the heart of this enchanting world of books and ideas is a new cultural destination – a double height light-filled central forum, inserted as a giant ‘glass jewel’ box into the horseshoe shape of the existing building. Conceived as a ‘free space’ for research, discovery and dialogue, the translucent glass structure mediates between earth and sky, books and people, building and garden, historic city and the spectacular presence of the Puy de Dôme on the horizon. Literally rooted in the volcanic strata of the city, crater-like subterranean gathering and performance spaces animate the central forum and relate to the myriad of caves and storage chambers beneath the Hôtel-Dieu hospital.

The project will employ passive cooling strategies and will focus on responsible use of materials – such as locally sourced volcanic stone and a timber engineered structure. 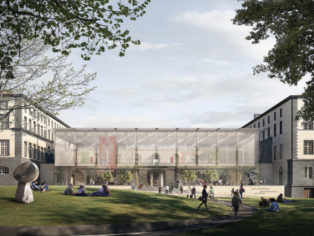