Valuable community projects and talented staff have been recognised at the annual awards ceremony held by Novus Property Solutions.

The Novus Excellence Awards acknowledges the employees who make an outstanding contribution to the dynamic property maintenance company over the course of each year.

At a gala dinner at Stoke City’s Britannia Stadium, guests were treated to a three-course lunch and an inspirational speech by successful media mogul Ellis Watson, before a glittering awards ceremony paid tribute to the people who have shaped a hugely successful year for Novus.

Novus places a strong emphasis on serving the communities it works in, and the company’s managing director, Neil Hand, gave out awards to 10 different teams who worked on successful projects that formed part of the company’s Changing Lives initiative. Special recognition went to a broad range of projects, including the Complex Needs facility in Bristol, and a community centre makeover in Wrexham.

Novus has a long history of successfully nurturing apprentices, and the Excellence Awards saw Daniel Holdcroft named as the firm’s Apprentice of the Year for 2015.

The day’s celebrations marked a successful 2015 for the company, which turns over in excess of £100 million a year, has 1,000 staff and was named Employer of the Year 2015 at the Construction News Awards.

Neil Hand summed up the mood at the event, saying:

“It is always a proud moment to bring together the people who are behind the progress we make each year.

“Having been recognised as Employer of the Year in 2015, we wanted to make sure that the individuals and teams who make our business great received similar recognition.

“I would like to personally congratulate everyone who has been involved in the Changing Lives initiative, which plays such a vital role in bringing us closer to the communities we work within, and also all the company’s talented apprentices.” 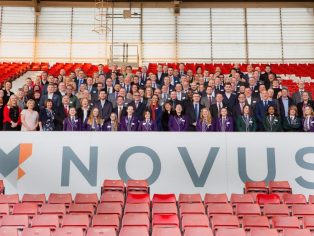