On Tuesday 21st July, award winning developer, St James, will be holding a ground breaking ceremony to mark a major milestone in the regeneration of a substantial brownfield site in the heart of Hornsey, N8.

The land had been largely derelict for twelve years until St James got involved with the site in early 2014. St James then worked closely with local planners, joint land owners, Haringey Council and Sainsbury’s and undertook extensive consultation with residents in the community to create a scheme that would both complement and enhance the locality.

The developer is now in the process of turning the 5.24 acres of brownfield land into a landmark scheme of 440 new homes, due for completion towards the end of 2017/early 2018.

Unlike many other London new build schemes, a significant proportion of the homes at Smithfield Square will be affordable housing – 168 apartments representing over 40 percent of the properties being built – alongside 270 private apartments and two ‘live/work’ units.

Fronting onto Hornsey High Street, Smithfield Square is set to become a central hub for this area of North London with the arrival of a brand new Sainsbury’s store and parking for the high street, plus extensive public open spaces.

Scarcity of easily developable land and the widespread unpopularity of building on the protected Green Belt means that much political emphasis is placed on developing on brownfield sites – disused land previously utilised for industrial purposes.

RICS recently published research suggesting there is enough brownfield land available in England to build 226,000 houses by 2019, while the Conservatives have pledged to prioritise development of this type of land over the next five years. The party’s manifesto promised to ensure that 90 percent of these unused sites that are suitable for housing are granted permission for homes by 2020.

“Unlocking a brownfield site poses many challenges. This is a highly complex operation from a build perspective. Elements such as the gradient of the land means we are having to construct the apartment buildings on different ground levels; we have also had to divert the River Moselle which currently runs underneath the land in order to make the site construction ready.

“We are committed to completing the development by late 2017/early 2018, with both the affordable and private accommodation under simultaneous construction. We have also designed all the new homes to be tenure blind, so they all share the same external facade. This scheme is an excellent example of how to work in partnership with the local council and planners.”

Incorporating a blend of traditional materials within contemporary architecture, a strong emphasis has been placed on the landscaping design throughout the entire development, with both private and public areas designed to enhance a strong communal feel and 1.8 acres of public spaces equipped with seating and children’s playgrounds.

Also, in order to retain some of the local heritage St James will be sympathetically renovating a derelict, locally listed building, Campsbourne Well, a former Victorian pumphouse, to restore it back to its former glory.

“Smithfield Square in Hornsey falls within the Council’s regeneration framework, Haringey Heartlands. The development will bring a selection of new homes across a range of tenures and a significant number of jobs to Hornsey, contributing to the ongoing transformation of this area.”

Hornsey is one of the few remaining areas of London with an understated profile and while still relatively undiscovered, it is currently going through a significant transformation. With a strong neighbourhood feel orientated around the tree-lined High Street, Hornsey sits at the foot of the magnificent Alexandra Palace Park.  With fashionable neighbours Muswell Hill and Crouch End it also benefits from great direct transport links to Old Street, Moorgate and Kings Cross, Smithfield Square is the only significant new build development of this scale and quality in the locality under delivery. It is certainly going to assist in putting Hornsey firmly on the map as a desirable and aspirational place to live. With prices offering relatively good value particularly in comparison to neighbouring areas such as Muswell Hill and Crouch End, Smithfield Square offers buyers an opportunity to buy a home in Zone 3 from the trusted Berkeley brand in a regeneration area with great transport links.

Site history
The Smithfield Square site is exactly the sort of long derelict, brownfield site that the Government wants to see brought back into use. 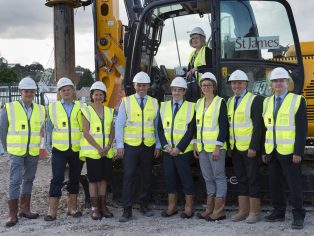