SPPARC has unveiled its design for a new museum and visitor centre for The Golden Hinde – a full-scale 300 tonne working replica of the 16th-century sailing galleon, in which Sir Frances Drake famously became the first Englishman to sail around the world. The proposed development of the museum and visitor centre, which is due to be submitted for planning later this year, will follow extensive refurbishment of the ship, which is currently underway in Bankside, London.

For the past few months, passers-by have been privy to a living museum on London’s Bankside.  St Mary Overie dock has been drained, whilst craftsmen work in situ on the renovation of the ship, using traditional tools and shipwright methods that haven’t been used in a London dock for generations. 56 tonnes of huge, sustainably sourced, oak trees have been transported to London from the New Forest, and the National Trust in Sussex to help return the ship to its former glory. The renovation will help set the scene for this new museum and visitor centre which will seek to assert The Golden Hinde as an important historical and cultural monument.

Comprised of two levels, the 1,125m2 proposed scheme will feature a new ticket hall, an accessible education space which will explore the history of Drake, and an exhibition space. At the lower ground level, the new visitor centre will have an external covered walkway with viewing galleries to the ship, WC’s, and much-needed offices for staff.

The materiality of the museum and visitor centre echoes the same timber used for the creation and renovation of the ship. Crafted from solid English oak and glass, the proposed museum and visitor centre will wrap around the ship with the education centre seemingly hovering over the water. In the spirit of The Port of London Authority’s 2035 Thames Vision, the proposal will open up new views of the River Thames, bringing more community and culture to the river banks.  More specifically, visitors will now be able to view a number of key locations along the river that have connections to Drake including Drakes home near Cannon Street and where the original Golden Hinde was moored near Custom House.

Glass will be used through the lower ground galleries to allow visitors to view the ship from different angles, whilst light and shadow effects cast from the timber structure of the visitor centre will chart the route of Drake’s journey around the world in a unique exhibition.

SPPARC’s design approach aims to restore, preserve and interpret the history of both the original Golden Hinde and its famous shipman, and the colourful history of the replica herself. Indeed, the ship now moored at Bankside has had many adventures of her own, including her maiden voyage in 1974 in which she travelled more than 140,000 miles from Plymouth to San Francisco.

The Golden Hinde already attracts thousands of visitors annually, and is a recognised landmark for locals and tourists alike.  However, SPPARC’s proposal for a new museum and visitor centre aims to show that it is also an important part of the cultural and historical offering of the area. The proposal will provide visitors with an exceptional learning experience on the history of the ship and Sir Frances Drake, as well as a dedicated home for artefacts relating to the explorer, which are currently scattered around the world.

“The brief for the new Golden Hinde visitor centre called for a unique design which learnt from the skilled craftsmanship and innovative nautical engineering of this iconic ship. The concept was derived through the desire to reflect this history of The Golden Hinde and Sir Frances Drake in a contemporary visitor centre.”

“SPPARC’s passion and energy has been fundamental in creating this new vision for The Golden Hinde in London. We are most impressed by the way the building both complements the ship and ties in with the modern surrounding architecture. This visitor centre will allow us to deliver on a much grander scale and will turn The Golden Hinde into a major cultural destination.”

To support the fundraising campaign for Golden Hinde Ltd, please contact info(Replace this parenthesis with the @ sign)goldenhinde.co.uk 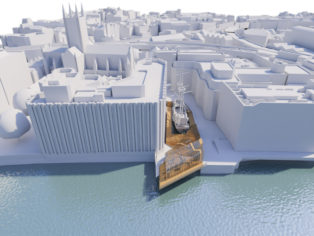 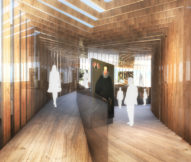 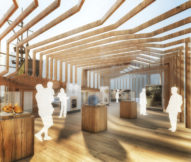