The scheme, which received planning permission in March 2017, and is due for completion in 2020, will feature five mixed-use buildings including Grade A workspace, retail, gallery, restaurants, cinema and creative spaces. The high-quality public realm scheme will restore and reinvent the lost medieval street pattern of the area adjacent to the world-famous food destination Borough Market.

Restoring and rejuvenating an important part of south London’s Victorian railway heritage, the landmark scheme will also repurpose 8,500sqm of existing railway arches. SPPARC’s design weaves together historic fabric with contemporary architecture and new public spaces to open up the site to its Bankside context and bring new pedestrian permeability and amenities to the area.

“Borough Yards will become a new cultural destination that reflects the work/play balance of modern London.”

“Located next to the historic Borough Market, the development of new streets, cultural galleries and flexible workspace will be a lively addition to the area which currently lacks any fashion led retail.”

“The once divisive Victorian brick railway viaducts will be opened up to allow for pedestrian lanes. The scheme’s design engages with existing fabric and patterns of pedestrian movement to integrate new architecture and re-purposed structures into a complex urban context.”

The arches will be opened up and transformed to create raw-brick cathedral-like spaces for a new retail environment, cultural spaces and gallery. A simple glass frontage with industrial scaled structure will be recessed between each arch to allow a visual appreciation of each impressive Victorian span.

In addition, the project will see the complete redevelopment of former wine-tasting venue Vinopolis and neighbouring sites fronting the pedestrian paths linking Tate Modern with Borough Market, the newly reconfigured London Bridge station and The Shard.

The proposal incorporates retained facades of forgotten warehouses which will be sensitively blended into the new Borough Yards district, providing elevations to two, six storey office buildings. Inspired by Victorian terraces bounding its Stoney Street site, the long elevation of the largest new building incorporates a series of folds that respond to the rhythm of the townscape whilst reaffirming the re-emergence of the location.

Borough Yards is just one of many SPPARC projects in Southwark, including: 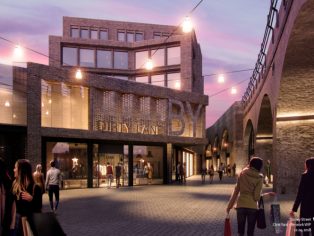