An award-winner at a leading house builder is celebrating after being promoted from assistant site manager to site manager.

Spencer Silverman has moved up the ladder at Persimmon Homes Essex and has taken the top job overseeing construction of the second phase at Nightingale Gardens in Stanway, Colchester.

Spencer and former site manager Simon Gronland were awarded an NHBC Pride in the Job Quality Award earlier this year for their work supervising the first phase of the development.

Simon has since moved on to become contracts manager at Persimmon, giving Spencer the chance to take the lead role.

Spencer, who lives in Chelmsford, said:

“It’s nice to be able to progress within the company and take charge of the site.”

“It’s a fresh start and it’s good that a new phase is just beginning and I can make it my own.”

“It’s a wide-ranging role that is different every day, including liaising with sub-contractors, ordering materials and making sure everything is running to schedule.”

Spencer has worked for Persimmon Homes for two years and has about 20 years of experience within the industry.

And it’s become a family affair for father-of-four Spencer, whose 22-year-old daughter Jodie is a trainee sales advisor at The Drive in Romford.

“It’s nice that Jodie is now at Persimmon as well. We do have a bit of a chat about what’s going on when we get home – but we try not to talk about work too much.”

The second phase of development at Nightingale Gardens consists of 101 units. There are 81 private homes made up of 13 two-bed apartments, 50 three-bed houses and 18 four-bed houses.

Of the 20 affordable units, six are two-bed apartments, 11 are three-bed houses and two are four bed houses.

Nightingale Gardens in Stanway is ideally-located for commuters, first time buyers and families alike as it boasts excellent transport links to amenities in Colchester’s town centre, and is a short distance from the A12, the trunk road for Chelmsford and London.

The site has previously been praised by the former Mayor and Mayoress of Colchester, Colin and Laura Sykes, who applauded the way Persimmon engaged with the community before starting building work. 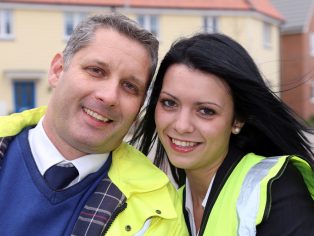