Berkeley Group has released the details of a major economy boost for west London, as a result of its consented 88-acre regeneration, Southall Waterside.

The scheme is anticipated to uplift the local economy by £47 million, thanks to delivery of 3,750 new homes, creation of over 600 jobs during and post-construction, and 500,000sq. ft. for new retail, restaurants and cafés. Over 25 years, Berkeley will transform the former gasworks into an exciting new mixed-use destination inspired by the rich culture and heritage of Southall, yet designed to complement its well-established and much-loved town centre.

Southall Waterside will also deliver a two-form entry primary school, health centre, and substantial open and green outdoor space. The masterplan will see over half the site dedicated to open space – a network of public parkland, square and courtyard gardens. A central park will run through the scheme, connecting the development’s eastern boundary next to the Crossrail station, to the Grand Union Canal to the west.

In addition to increased employment, it is estimated that the development will house approximately 9,000 people, boosting local retail expenditure significantly. Completion of Southall Waterside’s first homes will coincide with the opening of the Elizabeth Line in 2019.

With a 23-year delivery timeline, Berkeley Group has made early commitments to laying the groundwork to ensure longevity of a sustainable workforce.

With more people leaving the construction industry than joining it, the recent Farmer Review stressed the importance of a home-grown solution. This must be nurtured through a multitude of channels – a task well underway at Southall Waterside through engaging initiatives with west London’s young people and NEETs aiming to highlight the career options available, as well as upskilling those already with basic training.

Through a variety of means, including construction career open days, establishing a construction academy, partnerships with local further education providers, and cross-sector training with sports clubs, Berkeley Group looks to get a head start on mitigating approaching challenges.

“Construction trainees are in short supply, but demand is high. With the apprenticeship levy coming into effect next year we’re focussed on setting an example for the industry. There can be certain misconceptions about our sector that create a barrier to entice new entrants, but with a bit of education and creative engagement we hope to attract strong candidates with big ambitions.

“At Southall Waterside we’re going to be making a significant impact on both the immediate and wider area. The results of our latest economic impact assessment demonstrate that impact in a major way – and with its results we invite those looking for a promising career to make themselves known. Given the scope of housebuilding targets in London for the next few decades, there’s never been a better time to consider a career in construction.”

Berkeley Group has committed to provide training to 1,500 people through construction apprenticeships, its graduate scheme, or for those working on NVQ or equivalent qualifications by 2018. Across the Berkeley Group, each home built sustains six jobs. 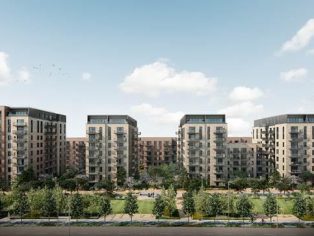