In 2014, the Kingston Hospital NHS Foundation Trust embarked on a major refurbishment programme to replace the windows and doors of the hospital’s Esher Wing. The work was commissioned not only to improve the building’s aesthetics, but also improve thermal performance, reduce energy costs and deliver improved patient, visitor and staff comfort.

The seven-storey block contained a mix of wards, operating theatres, maternity units and administration facilities, with all four elevations still featuring the building’s original 1960s, heavy-duty steel windows which were well beyond their useful life. As a consequence, the performance of the windows had become extremely poor, with both drafts and water ingress causing major issues.

After an exhaustive scoping and tender process, the trust awarded a management contract to construction consultants Pellings, who took responsibility for the detailed design, specification, procurement and project management of the whole programme. ARJ was subsequently appointed main contractor, with the fenestration fabrication and installation contract being won by Heritage Window Systems (HWS), one of Smart Architectural Aluminium’s specialist partners.

Having been appointed, HWS’s first task was to undertake a full survey of the wing, which revealed a significant variation in the size of the window apertures. To address this, Heritage and Smart developed a novel solution – effectively based on a curtain wall ‘grid’ system with variable trim to allow for the different size of the window units.

“This was the only way that we could meet the programme and give the installation team enough flexibility on site to react to programme changes. We sourced colour-matched trims for the windows and then trimmed each one on site to exactly meet the dimensions of the aperture.”

“Although the size of the windows was quite large – nominally, each was six metres wide by three metres high – our experienced teams of fabricators and installers were certainly able to deal with units of these dimensions. The main issues we faced were logistical. With work being carried out as the hospital continued to operate, we had a very exacting programme to follow – and a period of just nine hours to complete the upgrade for each unit, whether that was a ward, a theatre or an office. In that time, our teams had to take out the old windows, fit the new units, change the radiator and clean the area to a clinical standard.”

“We also undertook the work through the summer of 2015 which had some very high temperature spikes, leading to a rise in admissions and occupancy of many of the hospital’s wards. At one time, the hospital also had to create an isolation ward due to an outbreak of the Novara virus. As a result, our programme was subject to change at very short notice, and our contract manager was based on site for the duration of the work to make sure we kept in daily contact with all parties.”

HWS completed the work in just eight months, starting on site in April and completing just before Christmas, 2015. During this time, the company installed around 1,200 Smart Eco Futural windows – with a combination of tilt and turn and bottom-hung casement windows – as well as seven sets of Smart Wall double doors and the MC 600 curtain wall grid system. MC600 was specified due to the requirement to hang brise soleil units from two of the building’s elevations, with HWS fabricating a bespoke bracket to accommodate this.

The materials were finished to one of Smart’s own colour formulations from the company’s Sensations range, with an Antique Grey finish specified for the external profiles and Velour for the internal.

“The whole project was exceptionally well managed, with the clear communications between all parties a vital component of its success. As a result of the programme, we now have state-of-the-art windows which have considerably improved patients’ comfort and provided a much improved working environment for all hospital staff.”

Ian Nunn from Pellings had the final word:

“This was a technically and logistically challenging project, but one which was successfully delivered on time and under budget, thanks to a true partnership approach. All parties – Pellings, ARJ, HWS and Smart worked extremely collaboratively to ensure that the programme was achieved with as little disruption to the hospital’s staff, patients and visitors as possible.”

“While inevitably in a project of this complexity issues did arise, they were resolved quickly and collaboratively to ensure that the work remained on track. The end result is a much-improved appearance and a building which is warmer, weather-proof, more energy-efficient and better ventilated.” 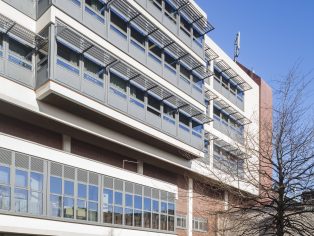