Sleep does it again

Sleep, the annual hotel design and development event which took place in London, 26th – 27th November, proved once again why it is considered to be in a league of its own by hotel designers, architects and senior industry executives. Experiential, insightful, thought-provoking and eyecatching, Sleep 2014 attracted some 4,000 visitors keen to do business with the exhibitors and network with peers, provided a full programme of conference sessions to packed houses and engaged with some of the industry’s most respected designers and hoteliers. Visitors came from Germany, Italy, Spain and France, the Russian Federation, the USA, South East Asia and the Middle East as well as from the UK.

More than 150 exhibitors participated in Sleep 2014, comprising a hand-picked selection of newcomers and new exclusive brands along with recognised industry names from around the globe. The exhibition highlights the companies whose products and services help to create award-winning hotels, and, in keeping with the show’s emphasis on high quality design, exhibitors excelled this year in producing visually striking stands to best showcase their products to the hospitality design community. Just a few of the many with stand-out displays were Curiosa & Curiosa, Dare Studio, FRONT London, Garpa, Lasvit, Morgan Furniture, mycoocoon, Northern Lighting and Swarovski.

New exhibitors were delighted with the quality and international mix of visitors to their stands, with Designheure, Gira, Jacuzzi, Moroccan Bazaar, Orangebox, Sara Newman Design, TOTO Europe and Ultrafabrics amongst this year’s newcomers.

“The response to Ultrafabrics first showing at Sleep was amazing, and the interest in our product far exceeded our expectations. Such was the interest we were getting calls the following day from designers asking when we would be able to visit them in their offices! As an International company, the level of strong interest and enquiries from outside of the UK was also very pleasing. We will certainly be returning in 2015”.

The industry’s favourite brands were once again well represented including lead sponsor GROHE, Agua Fabrics, Chelsom, Dornbracht, Harlequin Contract, Heathfield, Keramag Design, Kobe, OW Hospitality, Vescom and Wilton Carpets who each unveiled their latest designs. For many exhibitors, both new and returning, the show is a welcome opportunity to connect face-to-face with existing clients and discuss their project requirements as well as to engage with potential new ones.

Revealed at Sleep, the new generation of Snoozebox – which has already transformed the potential for overnight accommodation at mass events with its first design – greeted visitors before they had even reached the front doors. Also outside was Polcom Modular, a full-size model of a hotel bedroom concept demonstrating how a leading edge digital design process combined with modular manufacturing production can reduce development costs and enhance quality. Inside the hall, other outstanding installations continued the experience, each one custom-designed or curated for the event. Outdoor spaces were highlighted in the stunning Above & Beyond roof terrace designed by Scape Design Associates which was furnished by KETTAL Outdoor Collections with surface and light sourced by Cullinan Interior; a mycoocoon pod allowed visitors to find out for themselves the re-energising and relaxing benefits of light immersion treatments while the fabulously imagined Sleep Bar provided another working and socialising haven. This year, in association with Sleeper, the bar was designed by the award-winning firm Stylt Trampoli from Sweden who drew on the hall’s past to create a contemporary oasis.

Perhaps the most anticipated of all Sleep’s showcases is Sleep Set in which design companies and their contractors compete to create the most inspired hotel guestroom, edging conceptual thinking forward and daring to challenge industry assumptions. This year, it was industry outsiders, SKM Design, who triumphed over Nigel Coates Studio, NoChintz and Dreimeta in their design for a new ‘Hotel Simplexity’ brand.

“We came to Sleep last year and a contestant told us their business had a new lease of life after participating so we decided to go for it this year.”

“Recognition by Sleep has made a huge difference. We’ve met designers, architects and people from different hotel chains. It’s our fifth year of business and we’re hoping to do a lot more hotel projects now!”

The Sleep Conference brought to the stage such industry authorities as Josh Wyatt of Patron Capital; Katrina Craig of Hotel Solutions Partnership; Werner Aisslinger, founder of Studio Aisslinger; Billy Skelli-Cohen from Greenbrook and Carlson Rezidor’s Eugene Staal. For many though, the stars of the conference were hotelier and restaurateur, Jeremy King; Glenn Pushelberg and George Yabu; and another exceptional design duo, Patrick Jouin and Sanjit Manku. Jeremy King, who is currently distilling his magic into his first hotel, The Beaumont, advised the audience that “good design should not shout for attention, but should withstand scrutiny.” Yabu and Pushelberg risked the wrath of their client, Ian Schrager, by divulging just a bit of their vision for the new EDITION in New York’s Times Square, and Jouin and Manku described themselves as “realistic dreamers who liked to believe that things are possible to do, even when they haven’t been done before.”

One topic which threaded through Sleep, from the outdoor Polcom Modular prototype to Digital Lounge inside and into the Conference was the growing importance and value of leading-edge BIM technology. The iglooshaped Digital Lounge offered vertigo tingling “fly-throughs” enhanced by Google Glass and Oculus Rift glasses, created by Space Group and Soluis. Rob Charlton of Space Group gave an upbeat conference presentation on BIM and it fell to Mark McDonnell of Soluis to announce the winning team in the nationwide Underground Hotel challenge which tasked school children to design a hotel in a London underground station using BIM. The winners were from St Ambrose Barlow Roman Catholic High School near Salford.

Aspiring young talent of a slightly older generation was also celebrated at the event in the form of the Sleep ReardonSmith Student Award which bought the winning duo from Poland as well as the runners up to Sleep to share in the learning, soak up the atmosphere and, in the case of the winners, to receive a cash prize from ReardonSmith Executive Chairman, Patrick Reardon.

“The huge diversity of the many elements of Sleep means that both participants and visitors can take away with them so many different memories and ideas, let alone new contacts and renewed acquaintances.”

“Sleep is like a precious watch in which all the hand-crafted elements rotate around one another to create a unique piece that perfectly tells the time – in our case ensuring our exhibitors do great business and our visitors are inspired.” 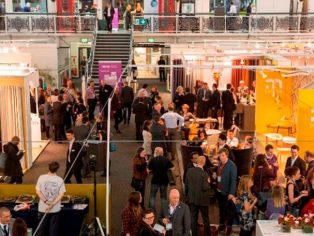