Bruce Bell of Facit Homes says that the emergence of digital methods of creating buildings means that architects can recapture their former territory as Master Builders.

Throughout the 20th century, architects have steadily become further removed from the process of making and producing buildings. This is especially true when you consider the scope of their forefathers’ role, as the Master Builders of the pre- modern era.

On large scale, complex commercial schemes this disconnect between architects and the production process is perhaps easier to understand than on individual residential buildings. However, technology is presenting an opportunity for architects to reconnect with the build process in a meaningful way.

Controlling all the craftsmen on a project, the Master Builder had a intimate knowledge of the various trades, and was intrinsi- cally involved in the crafting and making of a building. As the role of the ‘modern architect’ emerged, a great change ensued. Architects went off on something of a professional tangent, increas- ingly disassociated from many parts of the construction process, and becoming slightly abstract. Despite their vast skill and training, architects today are in many cases effectively reduced to shoppers, selecting and specifying products from catalogues for others to assemble, rather than actually designing and making in the tradi- tional sense.

Control of the ‘making’ has gradually passed to the contractors, who will often do what they want, or at the very least, implement their own interpretation of what was designed or intended. I fear that the skill, vision and passion that an architect brings to the initial stages of a project can therefore be lost once it moves in to construction, as they relinquish that direct control and become subservient to those doing the actual building work.

A return to ‘making’

Although it is not yet widely adopted in the UK residential sector, modern technology can put this control back in the hands of the designer and in fact, revive the role of the Master Builder for the 21st century. Digital design and manufacturing processes mean that architects are actually making the buildings once again, though of course now the digitally controlled machine acts as the hand, producing an exact replica of what has been designed with no potential for misinterpretation by a third party.

In the projects we undertake for clients, we design a timber struc- ture within a BIM environment and extract information from the 3D model to create code for a CNC cutting pattern. In this way the architect is directly responsible for both the design and the making. This applies across many other components, from laser-cut, aluminium window pods to staircases. In the creation of such digitally manufactured buildings, architects are able to again be engaged across the whole project, from concept to detailed design through to production and construction management, using their array of skills throughout.

This method also encourages the architect to have more interac- tion with the site itself, both physically and remotely via photos or video link. A site agent acts as eyes and ears on the ground, but the project is entirely controlled by the architect from both a design and delivery perspective. They drive the programme and make the decisions, combining architectural design and contract management duties and truly taking overall responsibility for the outcome, as the Master Builder would have.

The shock of the new

The first time a contemporary architect takes this role on can be daunting, delving deeper into the build than they have been before, but they learn a huge amount about the reality of their design decisions. Rather than being tasked with doing one thing repeat- edly, they move from package to package, detail to detail, and develop their knowledge and understanding of how the building is formed, in a more holistic way. It also exposes them to the dynam- ics of site-based issues, and allows problems to be resolved by good design rather than simply being patched over in isolation.

Re-engaging architects with the act of making, and closing the gap between design and construction can only be of benefit to both the profession and the built environment. I can see glimpses of a new generation of architects using technology to become closer to the craft element of the profession, engaging again with the responsibility, benefits and also joy of directly producing what they design. In so doing, they deliver the exact vision of a building that they have sold to their client, rather than a diluted version made by others.

Elements of this approach can be also applied beyond the creation of individual homes and on to larger-scale projects. In tackling the current housing shortage in the UK, the delivery of multiple dwelling developments driven by architects rather than the traditional housebuilders, could radically shift the emphasis away from simple profit to good design, whilst still offering great value. With technology allowing ease of volume production, and a trained designer taking control and responsibility for the outcome, the modern Master Builder would be a welcome addition to the UK’s wider residential landscape. g

Bruce Bell is founder and managing director of Facit Homes 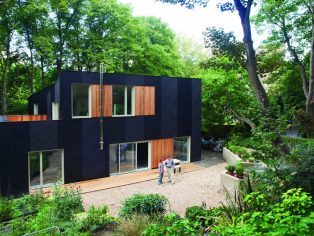