SimpsonHaugh and Partners has received planning permission to convert a 1960s office building into a contemporary hotel on a key regeneration site at Bridge Street in the north of Leeds city centre.

The 182-bed development is the first phase of a proposed mixed-use community planned by a consortium led by Singapore-based Heeton Holdings Ltd. This wider project aims to extend the quality of city centre development beyond the inner ring road by creating a new urban destination on a site formerly occupied by British Gas.

SimpsonHaugh and Partners’ scheme refurbishes a podium and 12 storey tower to the south of the one hectare development site. The building will be re-clad in a distinctive combination of terracotta and aluminium and will be reconfigured to suit its new hotel use with an extension at podium level. The double-height foyer, café/restaurant, bar and other front of house facilities will be located on the ground floor with bedrooms on the upper levels. Entrance is via a new public realm space along Bridge Street.

SimpsonHaugh and Partners took inspiration from the form of a theatrical stage curtain for the hotel’s most eye-catching element – the western gable of the podium. Highly visible to traffic passing on the ring road, this marks both the entrance to the hotel and raises the profile of the site along Bridge Street. The gable is clad in a deeply profiled, gold glazed terracotta and is visually permeable to gradually reveal the foyer beyond.

“The foyer of the contemporary hotel is a parallel for a theatre stage where guests enter and exit. The curtain developed as a thematic device in which the foyer is gradually revealed to the passer-by.”

The curtain narrative also references the site’s connection with historic woollen and textile industry character of the surrounding Mabgate area.

The combination of the existing podium’s salt-glazed terracotta cladding and brushed aluminium on the tower and podium extension, in addition to the gold clad gable create an elegant and sophisticated palette, provides a new identity to a highly visible building.

The new hotel is positioned near to both the Victoria Gate retail development currently under construction and the emerging creative quarter in Mabgate. By providing a new destination plus two associated public realm spaces and pedestrian connections through the area, the hotel is expected to help facilitate the redevelopment of the wider site. This includes substantial proposed residential accommodation, independent commercial spaces and landscaped public & private realm.

Site preparation works are underway with hotel construction due to begin in 2017. 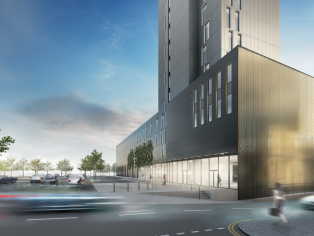