An innovative and comprehensive concrete reinforcement and waterproofing system from global building product manufacturer, Sika, was specified for use on Surf Snowdonia, a revolutionary inland surf lagoon in Dolgarrog, North Wales.

Built by D Morgan civil engineering contractor on a redundant former aluminium works and the size of six football pitches, the 300m x 113m long lagoon is able to generate the longest artificial waves in the world through unique wave-generating technology. This outdoor adventure park also features a hub building, lodges, restaurant, retail and play facilities. The lagoon has been built to strict profiling and contours in order to create perfect waves.

In the creation of the Wavegarden central channel, the base for the wave making machine, two large concrete boxes were constructed which included the specification of a robust and durable waterproofing solution. More than 400m2 of SikaProof® A, a totally new concept in membrane barrier design, together with 200m2 of Sika’s cementitious fibre reinforced Sikalastic®-1K waterproofing system delivered outstanding levels of watertightness to the central channel.

The membrane surface of SikaProof® A is embossed with a grid pattern, which contains a sealant, and is topped by a thin layer of fleece which forms a mechanical bond to the concrete when it dries. The grid pattern is also unique. It offers additional protection, due to the integrated sealant, which bonds tightly with the surface of the concrete, forming mini watertight compartments.

The contractor then installed the Sikalastic 1K cementitious waterproofing membrane to the visible element of the walls which will be above the waves. Ideal for waterproofing surfaces subject to flexural strain such as water tanks and reservoirs, this one component, flexible, fibre reinforced mortar, is based on cement modified with special alkali-resistant polymers.

Sika’s Adfil Durus polypropylene fibres were chosen by contractor D Morgan to replace traditional steel reinforcement around the edge of the lagoon in order to save installation time. The use of the macro synthetic fibres meant that disruption to the site was minimised, as the system enables faster placement within the concrete. In addition, fewer lorry movements to site were required than would have been the case with steel, further helping to minimise disruption.

Further advantages of polypropylene fibres included the fact they cannot rust, so no spalling of concrete will occur and fibre-reinforced concrete has 400 times better impact resistance and 25 per cent better abrasion resistance, making it better able to cope with water flow and debris. There is also an approximate saving of 50 per cent CO2 compared with steel reinforced concrete.

To complete the system, construction joints were sealed with Sika® Tricosal® Metal Waterbar. This consists of a galvanised metal sheet with a layer of composite film on one side that bonds closely and permanently to the concrete. This acts as a physical barrier to the passage of water through the joints.

With Surf Snowdonia due to re-open from the closed season in March 2016 , Sika has once again provided a proven, high performance concrete reinforcement and waterproofing solution that will ensure this revolutionary new adventure facility will stand the test of time. 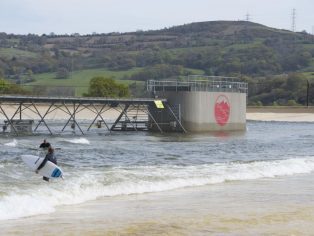