The Illuminated River Foundation has announced the shortlisted teams who have been selected to create concept design lighting schemes for London’s famous bridges.

105 design teams from around the world, made up of 346 individual firms, entered the Illuminated River International Design Competition, backed by the Mayor of London and the Rothschild Foundation, to breathe new life into the Thames. Forty-seven percent of the teams came from overseas, demonstrating that London remains a top destination for international designers, artists, engineers and technologists post-Brexit.

The shortlisted teams are:

No design was sought at the first stage, rather competitors made submissions based on experience, past projects and team composition. The six finalists will now go on to develop concept design lighting schemes for four bridges – Westminster, Waterloo, London and Chelsea – along with a design masterplan for all the 17 celebrated bridges between Albert and Tower.

The teams’ design challenge is to create an elegant and charismatic light installation that will be forward-thinking and environmentally-friendly, enhancing the capital’s status as a low carbon beacon and a world leader in cutting edge technology and engineering.

The concept designs will go on display to the public in November, in London and online.
It is anticipated that jury interviews with the shortlisted practices will take place in late November 2016, with the winner announced in early December.

“This competition is a really exciting opportunity – the shortlisted design teams will now have their work showcased in a world class cultural city. It’s fantastic that submissions have come from so many different countries: the competition shows that London is open to talent from all around the globe.

“The Illuminated River will breathe new life into the Thames and create a dazzling outdoor gallery for Londoners to enjoy each night, showing that our capital remains a leader in innovation, sustainability and artistic creativity. I wish all the finalists luck in the next stage of the competition, and look forward to seeing the ideas they come up with.”

“The response to the Illuminated River competition was extraordinary and humbling: more than 100 teams entered the competition, including some of the leading international names in design, lighting, technical and the arts.

“The final shortlist represents an exhilarating mix of talent, inspiration and design approach. In November the finalists’ concept designs will be unveiled, and London will have six possible visions of how the river ­ and the city ­ might be transformed after dark.”

“The combination of London’s emblematic river, the Foundation’s inspired vision, and support from London’s most notable civic stakeholders has attracted competitors from diverse cultural backgrounds.

“This shortlist brims with promise: these teams are at the intersection of art, architecture, technology, engineering, film and literature. They have put together fascinating combinations of skills and we expect great things of them.”

The Illuminated River Foundation also confirmed the full list of members of the international competition jury. They are:

The jury will be advised by the Competition Director, Malcolm Reading.

The Illuminated River project will provide London with a new, free permanent attraction and is supported by a broad coalition of stakeholders including the Mayor of London, the City of London, Westminster City Council, Transport for London, the Royal Borough of Kensington and Chelsea, and Network Rail. Around £20m in funds will be raised, largely from private sources by the Illuminated River Foundation, the coordinating charity which is supported by the Rothschild Foundation. 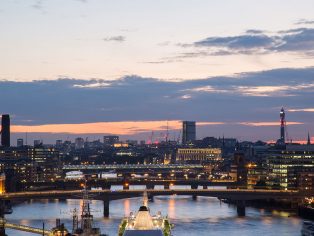