“Interest in low carbon heating has been growing for a number of years but we were really pleased at the numbers coming to our stand. Many of the visitors already knew about our Ecodan range and we also had a lot of interest in commercial heat pumps.”

Mitsubishi Electric has prepared a special video report on the Show for customers that were unable to make it to Ecobuild this year. The film includes interviews with key staff on the renewables industry and can be seen on the company’s dedicated Youtube page.

Whilst seeing a growth in interest at the show, Kellett is a little more realistic about how this will translate into immediate sales:

“We’ve seen steady growth year on year and I expect this to continue, but we won’t see a huge rise until the government lets people know when the heating incentive will start.”

Government Ministers from DECC (Department of Energy & Climate Change) were at Ecobuild and they reaffirmed the government’s commitment to launch the Renewable Heat Incentive (RHI) this spring – although neither was ready to announce a starting date.

The Ecodan range of heat pumps qualifies for both the domestic and non-domestic RHI, which reduces the payback period to encourage more people to adopt low carbon heating.

It will see commercial building owners, landlords and individual homeowners receive a quarterly payment – which can amount to hundreds of pounds, for up to seven years for domestic installations and up to 20 years for non-domestic buildings. Kellett adds:

“We have thousands of examples of Ecodan heat pumps being used up and down the country and we are also starting to see more and more commercial applications, these include schools, showrooms, agricultural sheds and now community heating schemes.”

Ecodan heat pumps are available in individual units from 4kW to multiple systems up to 688kW, with the ability to work in tandem with other heating technologies.

Further details on the comprehensive range of Ecodan heat pumps are available at the company’s website: www.heating.mitsubishielectric.co.uk. 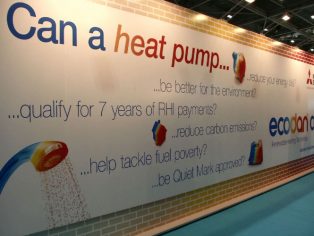