Its disc-embellished exterior has been a city icon for 11 years, but now Selfridges is giving city shoppers another reason to stare, as its world-famous window displays arrive in Birmingham.

Each year hundreds of thousands of tourists flock to Selfridges’ Oxford Street store to see the highly imaginative schemes that have entertained and enticed shoppers for decades, making them a tourist destination in their own right.

Originally installed in 1909 to encourage customers to visit, the windows have become an integral part of Selfridges’ identity, providing a platform to showcase the most exciting exclusive product, themes and events taking place in-store.

Now, as part of a £20 million redevelopment programme which will sees the store boast a revamped Beauty Hall and launch a new, dedicated Menswear space, Selfridges Birmingham will follow in the footsteps of the founding store.

The new installations, which – unlike their London counterparts – will be visible from 360 degrees, will change the face of the store, with 3.5m tall and 8m wide curved glass window displays located at the main entrances from the Bullring mall.

“The arrival of windows is a historic moment for us, as it presents a unique opportunity to captivate our customers before they even set foot in the store.

“The windows at Oxford Street have a worldwide reputation for using a powerful mix of design, fashion, art and architecture and turning them into pioneering displays. We certainly hope to capture that same magic in Birmingham. Setting the standard for the rest of the store, our windows will create a visually dramatic entrance, elevating the shopping experience from the get-go.”

Ab Rogers Design dreamt up the window designs as part of their brief to help Selfridges maximise the store’s presence and add a new aspect to the overall shopping experience.

Rogers, who is also head of interior design at The Royal College of Art, said:

“We wanted to create a dramatic shop front announcing the entrance of Selfridges as a gateway to another world.

“The building is the icon of Birmingham, and we felt it deserved an equally stunning entrance. We’ve created a super-sized fishbowl, a 360 degree shop window that customers can walk around as their first experience of the store.

“Selfridges has always been famous for its incredible windows, which demonstrate the store’s creativity and show off its phenomenal merchandise. This is our 21st century version.” 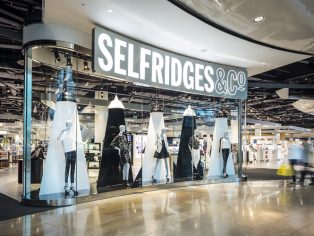