Grampian Housing Association is today celebrating a double achievement as it officially opens its 3,000th property built for social rent. It also marks the 40th Anniversary of Grampian Housing Association, which, over the last 40 years, has increased its portfolio from 31 properties for rent to 3,545 properties for rent and shared ownership, making it the largest housing association based in the North East.

To mark the occasion, Margaret Burgess MSP, Minister for Housing and Welfare has officially opened the Association’s latest development of flats for rent at Spencer Court, Froghall Terrace, Aberdeen. The minister met with local residents who directly benefit from additional affordable homes in the area and was shown around the new development itself.

Grampian Housing Association received £1.048 million of funding from the Scottish Government along with a grant from Aberdeen City Council of £121,360.

The £2.04 million development was completed in partnership with Barratt Homes and builds on the Association’s successful and longstanding relationship with the leading house builder.

The development is part of Aberdeen City Council’s Strategic Infrastructure Plan (SIP) agreed with the Scottish Government. Froghall Terrace contributes to the overall council target, to provide 2,030 new affordable homes in Aberdeen by 2017.

“The Scottish Government has invested over £1 million in this development, which is aimed at single people and couples seeking affordable housing close to Aberdeen city centre.

“Over the past 40 years we have worked hard to lead the sector in the development of significant affordable homes in Aberdeen and the wider area. There is still work to be done, but today’s 3,000th social rent property marks a significant moment for us.

“Opportunities to build affordable homes in the city centre are rare and being able to make this provision for people in housing need is an ambition realised.

“The economic landscape in the North East is one of extremes. While there is prosperity and a buoyant housing market, in sharp contrast there is significant concern about infrastructure restraints on the economy, a major one being the lack of affordable housing for the projected 35 percent increase in households over the next 20 years.

“In the last 12 years alone the number of applicants on our housing waiting list has increased from 3,000 to 15,000 demonstrating the desperate need in the North East for affordable homes.”

Looking to the future Grampian Housing Association is an important part of the regional mix to encourage economic development and support a healthy economy. The Scottish Government recognises that the supply of new affordable housing needs to be a high priority. The Association is keen to support this by working with the public and voluntary sectors to bring forward affordable land for development, as well private house builders and developers to source opportunities and seek funding to develop more social housing in the North East.

“This is a terrific milestone for Grampian Housing Association (GHA) with the completion of its 3,000th property over a 40-year period of delivering affordable housing for the north-east.

“The Spencer Court development is one of several that GHA has delivered recently and we look forward to continued joint working to help address the need for social and mid-market rented accommodation in the city.

“Housing is a key priority for Aberdeen City Council, and we have committed to the delivery of 2,030 affordable homes by May 2017 and 2,430 by 2019 as part of our Strategic Infrastructure Plan (SIP).”

“We are very pleased to be strengthening our successful partnership with Grampian Housing Association and continuing to support the communities in which we build.

“We have worked closely with Grampian Housing Association to provide high quality homes for local people and look forward to welcoming more residents to this attractive development.” 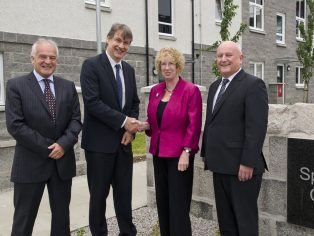 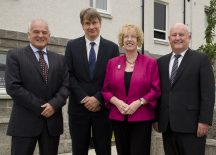