Schoolgirls are encouraged to consider construction

Girls from six Plymouth primary schools were inspired to think about job opportunities in the construction industry at a thought-provoking careers workshop.

Millfields Inspired, a charity formed by the Millfields Trust to encourage young people to make informed choices about their futures, organised the workshop recently in collaboration with the South West Women in Construction (SWWIC) organisation.

A group of 42 year 5 girls aged 9 and 10 from six local schools in Stonehouse were invited to visit the site of the Millfield Trust’s £5million new development on Union Street in Plymouth being created by Midas Construction. Midas project manager Neil Baker gave the girls a tour of the site, where the trust’s new Genesis building is taking shape ready to open as an urban hub for the Stonehouse area in 2015. The girls were able to see first-hand the kind of jobs involved in building a development of this scale.

Members of SWWIC including female building project managers, architects and engineers then gave lively presentations, explaining what their jobs involved and talking about the many career opportunities in construction.

“It was a fantastic day where real life ‘women in construction’ could describe to these year 5 girls how they got into the industry with the aim of igniting some passion so that they too could think about the exciting careers in this field.”

“Millfields Inspired aims to inspire young people to give them a taste for the world of work and help inform their future career choices, and thanks to our contract with Midas Construction on the new Genesis building, we have been able to deliver job and training opportunities in Stonehouse, as well as engage with local primary schools.”

The SWWIC organisation aims to raise awareness of the career opportunities available to women in the industry, and four members gave fun presentations to the 42 girls from six schools in the Stonehouse area of Plymouth – High Street Primary, St George’s C of E Primary Academy, Pilgrim Primary, St Peter’s C of E Primary, The Cathedral School of St Mary, and St Andrew’s C of E Primary.

“I wanted to be a hairdresser before I came here and now I want to think about being an architect. I didn’t know there were so many jobs like this that I could do.”

“It was a great day and I’ve been really inspired to become a builder now. I like playing with Lego a lot and this has made me think about the things you could do as a job which are like that. I wanted to be a teacher before but now I’m interested in building as well.”

“I’ve been inspired to be an architect, I really like drawing and it looks like a great job.”

“We talked to the girls about the many different kinds of jobs there are in the construction industry, from engineering and architecture to trades like plumbing and support positions in management and accountancy. The girls were really enthused and asked lots of thoughtful questions, and it was great to see how fired up they were afterwards about the opportunities out there.”

Other SWWIC members who gave presentations included Niki Read, a project architect at AWW; Sarah Lee, an architect at Stride Treglown; Eleni Kalyva, a graduate engineer from Hulley & Kirkwood, and Rachel Price, a senior project manager at Mace. The schoolgirls quizzed SWWIC members about their jobs and enjoyed hearing from Niki and Sarah about the problem solving involved in architecture, before Eleni engaged the group by talking about the challenges involved in creating bridges and buildings.

“If you want to make a real different to peoples’ lives and to create things that last, civil engineering is a great career.”

Rachel completed the workshop by showing the girls pictures of some of the biggest building projects in the UK in recent years including The Shard in London and the Olympic Stadium, and explained how exciting it was to be involved in managing building projects of this scale and importance.

The workshop is one of a number of initiatives organised locally by Millfields Inspired to create a sustainable change in the community through its Widening Horizons programme which aims to raise expectations.

The charity is supported by the Millfields Trust, a respected social enterprise working in Stonehouse to enhance the lives of local residents and create positive change for Union Street, as well as employment opportunities for local people.

Its work will be given a major boost when the new Genesis building opens on Union Street, creating an urban hub offering business space of varying sizes to support small and medium sized local businesses to start, develop and grow.

The Genesis building is being built by Midas Construction to BREEAM Environmental Standards alongside the trust’s thriving HQ business centre, and will be the first building in the South West to include a living wall, home to over 18,000 plants.

When it opens in early 2015, Genesis will house 35 mixed-size, flexible office spaces, hot desk and conferencing facilities and a full height atrium with glass lift.

Millfields Trust has already worked closely with Midas to use the building’s development and construction as a way of positively engaging with nearby primary schools and young people. Earlier this year, the site became a gallery for artwork created by pupils at six local schools in the area to celebrate 100 years of Stonehouse. 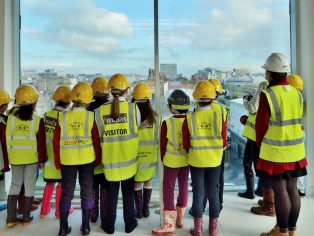 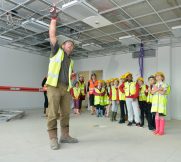