For the second year running Ryder Architecture has made The Sunday Times 100 Best Companies to Work For.

This year Ryder is the highest placed UK architect in the prestigious best small companies list. Nearly 900 organisations entered the awards and the opinions of 250,000 employees were canvassed, making it the largest survey of workplace engagement in the UK. Key indicators include leadership, management, colleagues, pay, training, wellbeing and CSR.

“We are delighted with this accolade, particularly for all our people who put in so much hard work and who clearly gain so much from working at Ryder. To be recognised in the Sunday Times top 100 for the second year running shows consistency in our approach ‘Excellence in our people, service and architecture’.

To be the highest placed architect is a great benchmark for us to measure continued improvement.”

With offices in Glasgow, Liverpool, London and Newcastle – where the company was founded in 1953 – the ethos of creating talented multi disciplinary teams fostered by the founders Gordon Ryder and Peter Yates clearly remains to this day. Now a 120 strong practice, Ryder has also been shortlisted for Building magazine’s Architectural Practice of the Year award. Its iconic £82m anti crime centre near Glasgow (Scottish Crime Campus) is nominated for a BCO award and it has recently been appointed for a major office project in Greater Manchester. 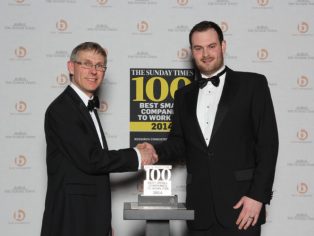