The White City retail park in Trafford is to undergo a £6.5 million revamp with the creation of five new build units, totalling 59,000 sq ft of additional space. Ten of the existing units will also be refurbished and the pedestrian walkways improved as part of the investment by owner Derwent Holdings, bringing the total space at the park to 148,000 sq ft.Manchester-based contractor Russells Construction has been appointed to the build, following the delivery of similar schemes for Derwent at the Ellesmere Shopping Centre in Walkden and the Anlaby Retail Park in Hull. The contractor has commenced the 52-week programme and units will be available for occupation by spring 2015.

The works will be phased to minimise disruption for the park’s existing tenants and customers, which include Pizza Hut, Currys, SCS, Dreams, Furniture Village and Halfords. Four new-build units will be constructed at the west end of the site in phase one, before the fifth new build is built on the east side near to the Currys store in phase two. The majority of the refurbishment of existing buildings will be undertaken toward the end of the programme in phase three.

“The redevelopment of White City is our third retail park project for Derwent Holdings and we’re delighted to have been appointed to deliver it over the coming year. Building on our experience of similar projects in Hull and Walkden, we have planned a phased programme which will allow the park to remain fully operational throughout the build and existing businesses to continue trading.”

“We are making a significant investment in modernising the facilities at White City and providing additional retail space at what is already a well established out-of-town shopping destination. We’re pleased to have Russells Construction on board once again and look forward to the completion of the project in spring next year.”

The refurbishment will see the existing units modernised with new glass facades and ceramic rain screen cladding, and brought up to modern building regulations with improved energy efficiency, with the new-build sections designed to match. The use of glass canopies not only gives the buildings a more modern appearance, but serves to benefit customers who will be protected from the rain while walking from store to store. Manchester’s AEW Architects was responsible for the design and planning for the development.

AEW’s Nigel Machin, who works on schemes for Derwent across the UK, said:

“The retail park is being entirely rebranded and brought into line with Derwent’s signature design for its retail parks across the country. By using high quality design and materials, Derwent is raising the bar in terms of what is expected in out-of-town locations.”

Stephen Perrett of Cheetham and Mortimer has been appointed as the letting agent. 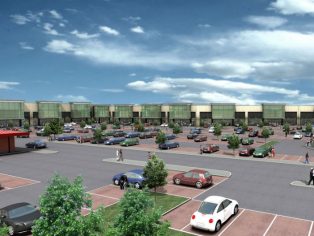