The sensitive interior upgrade of a boutique hotel in Chelsea revealed itself to be an even bigger challenge for the architects, once they discovered the myriad of secrets the building held. James Parker goes behind the scenes

High-end boutique hotel 11 Cadogan Gardens comprises four attached four-storey Victorian townhouses in a small street tucked away behind Sloane Square in west London. The internal remodelling of this grand old building was, on the surface, a tantalising proposition for hotels specialist ReardonSmith Architects. However, the first extensive upgrade the building had seen for a number of years was to provide a series of surprises which would test the firm’s expertise. Client Cadogan Estates and new operator Luxury Hotel Partners decided that they wanted bigger guest rooms for a highly discerning, and high paying, clientele. This would enable the hotel to achieve revenue not possible with the currently largely small rooms. Not only that, some of the back of house provision was limiting and the client wanted to ensure that staff felt valued to help them provide a high standard of service.

There were also numerous unused spaces which were being wasted, although in remodelling them ReardonSmith and interior design firm JSJ Design would need to reproduce the very English eccentric glamour which was the hotel’s unique selling point. The biggest challenge for the architects was that the hotel was to be kept open during the entire refurbishment. ReardonSmith presented the client with high, medium and low intervention options in its feasibility study, but in order to maintain live operation throughout, the only choice was low intervention.

This (in addition to the need to adhere to time and cost parameters) meant a holistic ‘stripping out and starting again’ approach was not possible, instead the architects would have to carefully work around the existing building, and its guests. A careful three-phased solution was arrived at by the architects, which would require patience from hotel guests, with workmen sometimes working in very close proximity to guests dressed in their finery.

However, project architect Gary Kellett says that in addition to many design challenges, ad hoc alterations made over the decades resulted in some nearfarcical moments during the project. “You would turn the water off at one end of the hotel, and at the opposite end someone’s bathroom would go offline.” He adds that the project team took a diligent approach: “Whenever we shut off the services we had a full design team meeting, and put strategies in place.”

11 Cadogan Gardens had 62 guest rooms on commencing the project; the refurbishment would cut this to 56 but include eight new suites among a total of 25. Kellett describes the approach taken to investigating the space available to see where it could be rationalised effectively: “Part of the challenge was to understand what the unusable space was, and how we could utilise it to bring it back into sellable floor area. There were a number of small box rooms which were being used for storage and ancillary space, as they could not be used for guests.” Kellett explains further how looking creatively at what the spaces could deliver helped guide the design, and the “backbone” of the project was turning 12 small single rooms into six suites. The new guest rooms are in a wide range of sizes and styles, but all exude the quirky but high quality look of the hotel. Many are fitted around the “nooks and crannies” of the building’s Victorian interiors. They have all been finished to a painstaking level of detail; something which ReardonSmith prides itself on.

Those many reactive interventions done over the decades, lacking overall control, meant that in places the structure had been compromised. However, the extent to which this was a problem was only revealed as each area of the project was tackled, when building elements were removed. While the primary layouts of the houses remained as was (staircases, light wells, windows), Kellett confirms that there have been “a lot of interesting interventions, which threw up some interesting level changes.”

He adds that these piecemeal alterations were generally “tweaking to solve an internal problem – what you end up with is inefficiencies that manifested themselves in very small rooms.” In dealing with these challenges ReardonSmith had to address the building sensitively, “while maintaining the design intent and ensuring the project did not escalate beyond our control.”

Explaining this further, Kellett says it tied into the key design driver of future-proofing the building: “We had to ensure that scope creep didn’t occur and that it became a higher intervention project. This meant taking a firm approach to ensuring things happened within certain parameters. Not only to benefit the scheme itself, but also any further major interventions the hotel wished to do at a later date.”

This future-proofing included earmarking spaces which didn’t need to be addressed as part of the low intervention, but which could accommodate lift shafts along with guest circulation routes within the lower ground floor in future. Services risers were also introduced with branches for future expansion. In the meantime however there was the small matter of a host of structural challenges posed by the existing building.

One of the ‘headline’ discoveries made once close investigation began was that a significant section of the roof structure had been removed, compromising the strength and integrity of the rear pitched roof. In addressing this however, reintroducing new supporting steels could impact on ceiling heights, harming the premium nature of the suites.

ReardonSmith had to work closely to jointly develop design approaches with structural engineer, MEP partners, and interior designer to ensure the design vision was maintained. In one room, as Kellett explains, once the ceiling joists, rafters and timber binder had been exposed it was discovered that a large amount of the existing roof structure was insufficiently supported: “One end of the timber binder was in effect hanging in the air.”

He explains how the solution avoided compromising the MEP services: “We had to reintroduce a primary structural steel to ensure that the load paths of the existing roof were transferred out and picked up on the original masonry party walls. Because the new structure spanned the length of the room through the mid point it did not interfere with any of the new services.” The need to remove substantial amounts of asbestos discovered in the roof void not only meant the top floor was off line for a period, it also revealed 14 water tanks.

While some were redundant, there were much bigger structural issues that requiring careful handling by the design team. Kellett explains: “To be frank, a lot of the structure that was thought to be taking the load of the tanks actually wasn’t – they were almost hanging, supported by lightweight timber partitions rather than their load being transferred down to the party walls.” In two guest rooms past alterations had compromised timber purlins which took the load of the roof, including the tanks. Removing the tanks significantly helped reduce the load, but further steel supports were needed.

“These needed to span the full length of the room as intermediate support was not possible,” says Kellett. Given the constraints of the site, he and the structural engineer devised a ‘cranked steel’ member with a spliced centre section detail allowing the beam to be transported through the site in smaller sections and bolted together when in place. A new fan coil unit and associated ductwork above the ceiling had to be carefully positioned below the steel to not compromise the ceiling height, or existing door opening, and there also had to be enough clearance for bespoke wardrobes.

In a lot of the hotel’s lower floors, large sections of the original timber joists had been cut out to make way for past installation of plumbing and/or electrical services. Says Kellett: “It was only once we lifted the floorboards that we could see that a lot of the structural integrity of the primary floor members had been compromised,” and new joists and strengthening would need to be introduced.

The key differentiator in a high-end boutique hotel, enabling it to command high premiums a tough market, is the attention to detail in guest rooms, including if not more so, bathrooms. Says Kellett: “We set the bar exceptionally high on getting the fine detail right, having worked with big brands such as Four Seasons, and we have a no-compromise approach.”

While this often comes down to prosaic issues such as careful coordination of positioning of services, the result is consistent bespoke-designed quality. With extensive experience in fine finishes, and materials such as the large-format stone panels used on bathroom walls, ReardonSmith was able to meet the client’s stringent expectations. Working in collaboration with the interior designer, the architects took a leading role in ensuring elements such as mechanical fixings and waterproofing were carefully integrated to achieve a high quality finish.

This included making sure that “interfaces between the vanity units, bath, upstands were all allowed for,” Kellett explains. He adds: “This is second nature to us, and we were able to offer support to the interior designer.” Sometimes, the architect had to take a firm line challenging the client’s expectations, such as holding back its desire to remove one of five private entrances to the suites. “We had to explain this would create an uncomfortable back of house/front of house crossover which we felt was unacceptable,” says Kellett.

However with the two key suites (the Guinness and Cadogan Suites located on the ground floor) being remodelled with respectively a larger bathroom and walk-in closet, the client was satisfied with the solution.

With ReardonSmith quickly realising that improvements to the back of house areas were a key focus, but here also there were hidden surprises. “We found unknowns such as active and redundant manholes,” says Kellett, “but we were very quickly able to come up with alternatives, even while we were on site.”

Although the kitchen and laundry were not touched as the hotel had to maintain constant operation, a whole new back of house area was created for staff including changing rooms, offices, toilets, canteen. From having an original staff canteen of around five square metres, the difference seen in staff going back into these areas was “night and day,” says Kellett. He adds: “Now whenever you are at the hotel there is a nice buzz around the back of house, it feels alive again.”

While Kellett says that “going into this project we had to do an awful lot of undoing in order to move forward,” there were challenges the firm had to grapple with beyond those thrown up by the building itself.

The project commenced in January 2015 but due to a change in main contractor did not complete until April 2016. The architects harnessed their already strong relationship with the client to take ownership of project delivery to a large extent, even spending five weeks on site during “more challenging periods.”

Says Kellett: “It was crucial we were able to brief the hotel and give them advance warning. Given it was a boutique hotel were fortunate to be able to interface with most staff.” With all eyes on minimising the contract overrun, ReardonSmith ensured handover of guest rooms was done as quickly as possible without compromising quality, including liaising directly with suppliers and sub-contractors.

The galvanised relationship with the client will be invaluable on further renovation projects it has planned in Chelsea, which are sure to pose their own set of challenges for the architect. 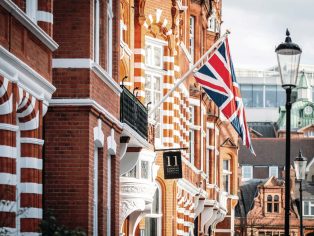 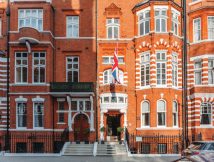