REVEALED: the winners of Architect of the Year Award and Moira Gemmill Prize for Emerging Architecture

The Architectural Review has announced American Jeanne Gang as Architect of the Year and Mexican Gabriela Etchegaray as the winner of the Moira Gemmill Prize for Emerging Architecture in its Women in Architecture Awards.

Both women have demonstrated excellence in design and a commitment to working both sustainably and democratically with local communities.

Judges were particularly impressed with Gang’s tri-axial Arcus Center for Social Justice Leadership and Etchegaray’s artisanal Mezcal factory in Santiago Matatlan, Oaxaca, which has helped give economic life to the local community.

As winner of the Moira Gemmill Prize for Emerging Architecture, Etchegaray will receive a £10,000 prize fund created in memory of the late Moira Gemmill, director of design at the V&A and latterly director of capital programmes at the Royal Collection Trust. The prize fund will support Etchegaray in her continuing professional development.

Jeanne Gang has commented on the Arcus Center:

“In the past social justice and social justice activism seems like it’s always happened in invisible places. With this project there’s an actual building, something that embodies the idea of social justice in every way from its outside to its inside.”

Gabriela Etchegaray is co-founder of art and architecture studio Ambrosi Etchegaray and has worked extensively in architecture and local heritage across residential and public projects.

Christine Murray, founder of Women in Architecture and editor-in-chief of the Architectural Review commented:

“The judging process was such an inspiring event and a hugely exciting day. The jury fell in love with the fabric of Jeanne Gang’s Arcus Center: its feeling of warmth and its attempt to embody its social purpose. Gabriela Etchegaray impressed the judges with her commitment to excellence in design and evolution of that design – and we really felt that her work sprang from a sense of place.”

“There is so much talent out there. And the younger generation of architects, as well as more established names, is impressive.

“The Arcus Center is an interesting building – the materials, the taking of a vernacular, bringing it up to date. It is a building that will respond to the climate, to the elements. It is very gentle in its setting with a strong social agenda.”

Also celebrated in the 2016 Women in Architecture Awards are French architect Odile Decq who has won the Jane Drew Prize and director of the Serpentine galleries Julia Peyton-Jones who has been awarded the Ada Louise Huxtable Prize.

The judges described Odile Decq as ‘a creative powerhouse, spirited breaker of rules and advocate of equality’, and Julia Peyton-Jones was celebrated for her ‘incredible global impact achieved with limited resources – and as someone who has done so much to nurture architectural vision and make architecture available to many people’. 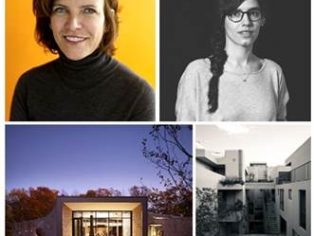