Sanlitun is a vibrant urban quarter in Beijing, home to Apple’s first store in China built in 2008. Relocating to a more prominent site adjacent to the previous, Apple Sanlitun seeks to create a new dialogue with the surrounding pedestrian streets, addressing the large open square that is a social focus for the district.

The design is the result of a close collaboration between Apple’s teams and the integrated engineering and design teams at Foster + Partners.

Stefan Behling, Head of Studio, Foster + Partners said: “Apple Sanlitun is all about being open and inviting – visually, physically and metaphorically. The store is a grand place that connects the inside and the outside.”Drawing on the vibrant energy of the area, Apple Sanlitun has a porous building envelope that opens out onto all four sides and connects to the multi-layered circulation network. The principal glazed façade facing the central square floods the display areas inside with natural light. Two monumental stone staircases on either side of the store lead up to the Genius Grove on the upper level. Lined with trees that add greenery to the perimeter, the glazed façade to the rear allows light into the space and dematerialises the boundary between the inside and the outside. The Forum, situated within the grand upper level, forms an animated backdrop to the space, which steps down with integrated upholstered leather seating forming a viewing gallery for the lively square outside. 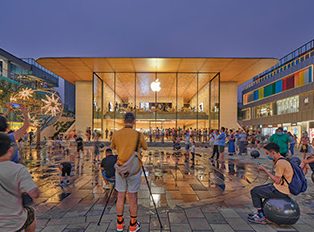