A regeneration scheme at a flagship city centre site will see a disused swimming pool and Turkish Baths brought back into use.

The Grade II listed City Pool complex in Newcastle closed three years ago and it looked unlikely it would ever reopen.

But now Fusion Lifestyle, which specialises in this type of project, has been named as preferred supplier by Newcastle City Council and is currently drawing up plans for the £5 million redevelopment.

Fusion, a registered charity specialising in the regeneration of sport and leisure facilities – both complete transformation into state-of-the-art modern facilities and sympathetic restoration of cherished heritage venues – was also behind a range of similar projects. These include the restoration and redevelopment of the Brockwell Lido in Lambeth, the Wycombe Rye Lido in High Wycombe and the New River Sports and Leisure facility in Tottenham.

“Nobody wants to see beautiful and culturally significant buildings standing empty and through time falling into disrepair.

“The fact this is right in the city centre and is a much-loved asset made that prospect even worse.

“However there has been a tendency over the past few decades to neglect or shut our historic leisure facilities.

“In the past few years – particularly as many are threatened with closure – people are waking up to the fact that these valuable resources may be lost forever and are recognising that they are important community assets.

“We have established ourselves as key players in breathing the life back into these assets and making them suitable for 21st century use.

“It is a pleasure to see these historic leisure facilities restored and being made use of by the communities that they were designed for.”

The site, which opened in 1928, also includes the Newcastle City Hall concert venue which will undergo a revamp as part of the scheme. The Hall continues to operate and will be managed by the Theatre Royal Trust.

“We are thrilled to be working with Fusion on this exciting project which will see a new era begin for one of the most culturally significant buildings in Newcastle.”

Fusion’s plans for the Pool and Turkish Baths will see restoration and refurbishment of pool and Turkish bath facilities, with the addition of a gym, studios, spa and café to convert the site into a modern health and wellbeing facility for the city. 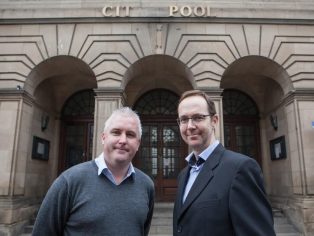