Children from Broughton Primary School are testing out their new wheels after scooping prizes in a road safety competition sponsored by Redrow.

The school is attempting to alleviate road congestion by encouraging children to walk or ride their bikes or scooters to school. Keen to ensure their classmates stay safe, the school council – which includes representatives of each class – launched a competition for children to design road safety posters.

Near neighbours Redrow, currently building new homes at Cransley Green just a short walk from the school, stepped in to offer scooters as prizes.

“Each class has been learning about road safety, which is increasingly important now that it’s darker earlier. They’ve been finding out about messages such as ‘stop, look and listen’ and ‘be bright, be seen’ and general rules around crossing the road. The poster competition was a way to reinforce what they have learned and thanks to Redrow’s generosity we were able to give a winner from each class a scooter.”

Entries in the competition were judged by pupils and staff who selected seven winners who were presented with their prizes by Redrow representatives.

“The children put a lot of effort into designing their posters covering everything from holding a parent’s hand when crossing the road to advice for drivers to be careful near the school. We were happy to be able to support the school’s road safety initiative by donating scooters as prizes.”

Sales of new Redrow homes at Cransley Green are motoring ahead, with early bird reservations now being taken for properties that won’t be ready to move into until next summer. 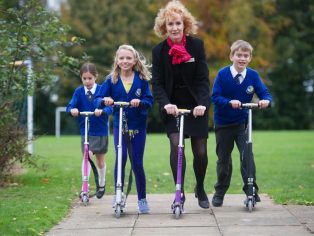