Aesthetically attractive and simple to install, Saxon 10 Slates from Redland were a straightforward choice when it came to roofing a ground-breaking £6.2 million care facility for those with dementia.

“The blue slates contrast particularly well with the red facing bricks and pleased both the planners and the client. They’ve attracted a lot of favourable comments from everyone including the roofers, who said they were easy to install.”

Built for Newcastle-based charity Eothen Homes, the 60-bed home, is recognised as the first of its kind in the North East, because it has been designed using research into the needs of people living with dementia. Eothen says the venue will provide a family environment where quality of life is at the top of the agenda and a key part of the design is “freedom, security and space”.

There are four households, each providing accommodation for 13 people, and every household has its own kitchen, dining and lounge areas to encourage everyone to live a life as close as possible to the one they did before. There are also eight apartments ideal for spouses whose partners are being cared for plus a guest room.

Manufactured with a riven surface, cut back interlock, thin leading edge and chamfered side edges, Saxon 10 Slates mimic quarried slate but have features that only machine-made tiles can deliver, such as single nail fixing and no requirement for eaves or top slates.

The 1,275m2 roof is at a pitch of 30º, though the slates can be laid at a minimum pitch as low as 17.5º, which extends the possibilities for designing distinctive roofscapes. The project also employed Redland ridge and verge components.

“I’ve been specifying Redland slates and tiles for 20 years and never had any issues – they’ve always been delivered on time and I had no reason to change so I gave the client the choice of four samples, but with a bias towards Saxon.”

Two vibrant, rich colours are available: a Black that matches the black-grey slate of Scotland; and Blue, which is based on the blue-grey slate quarried in Snowdon. The slates have a high quality acrylic-coated paint finish, creating a rich and consistently coloured roofscape. 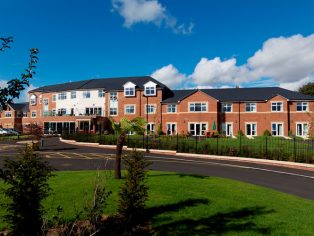