The Red House, designed by Feilden Clegg Bradley Studios and home to Plymouth School of Creative Arts, has won a prestigious architectural RIBA South West Award from the Royal Institute of British Architects.

The architect of Plymouth’s landmark building, Andy Theobald, Studio Leader at Feilden Clegg Bradley Studios, won RIBA South West Project Architect of the Year for his work on The Red House. Plymouth School of Creative Arts, which was founded and is sponsored by Plymouth College of Art, will now be considered for a RIBA National Award, in recognition of architectural excellence, the winners of which will be announced on 23 June.

The Red House has also been shortlisted in the final six for the international Architects’ Journal AJ100 Building of the Year award, the authoritative study of business of architecture, and Plymouth College of Art and Plymouth School of Creative Arts are shortlisted for the AJ100 Client of the Year award, nominated by Feilden Clegg Bradley Studios.

These new announcements come in addition to The Red House’s shortlisting for two 2016 Michelmores Property Awards, which showcase and celebrate the very best of the South West’s property and construction industry, demonstrating the national and international attention being generated by Plymouth’s landmark building.

Plymouth College of Art founded Plymouth School of Creative Arts in 2013 as a radical new kind of mainstream city centre 3–16 all-through Free School that, together with the college, is establishing a progressive continuum of creative learning and practice from age three to Masters level study and beyond. At the formal opening of The Red House, Sir Nicholas Serota, Director of Tate, hailed the school and creative continuum project as “an event in the history of education in this country.” The Red House was designed by Feilden Clegg Bradley Studios, a group renowned for their inspirational arts and education architectural designs, which include art universities, galleries and exhibition spaces such as the Yorkshire Sculpture Park.

The Red House is a site for pedagogical innovation in creative learning and a catalyst for community regeneration in Plymouth’s Millbay docklands, an area which includes amongst the 10 per cent most deprived neighbourhoods in the country. The building offers agile, open-plan studio spaces rather than traditional classrooms, mirroring the radical pedagogic structure of teaching within the school. These transparent areas are designed to both inspire students and provoke staff to work in new ways.

Creative design solutions and intricate planning by Feilden Clegg Bradley and intense collaboration between the architects, construction company and Plymouth College of Art, led to a cost of only £1,450 per m2, a fraction of the former Building Schools for the Future project costs. Adherence to tight deadlines allowed for partial occupation of the building after only 18 months. These accomplishments were made possible due to the high level of trust that the college placed in Feilden Clegg Bradley Studios’ ability to put its vision of creative education into practice. This trust, which led to the creation of a landmark that acts as a symbol of regeneration to visitors arriving in Plymouth, is the reason that Feilden Clegg Bradley Studios jointly nominated the college and school for the AJ100 Client of the Year award.

The school, which has already been rated Good by Ofsted inspectors, supports the transformation of individual life chances for students and has had an immediate impact on local families, with a range of community groups using the building during evenings and weekends. The distinctive ethos of the school is an art school ethos, an approach where children and staff at the school learn through making in all subject areas, across a broad and balanced school curriculum.

Speaking of the RIBA South West win, Chair of the jury for the awards, Keith Brownlie said:

“Schools should not have to cost so little, nor be built so quickly that their key driver is the satisfaction of ever more aggressive government targets. Given that they are, one can only hope that they deliver as much as this building does, (and thereafter that their success is not used to justify squeezing budgets and programmes further). The first and lasting lesson that is taught here is that our cities are, in general, blandly monochromatic. Large colourful buildings are normally limited to out of town retail parks without much to justify them other than shameless branding.”

“When bright, saturated colour is thoughtfully applied to a full urban block the effect is mesmerising. This is not however a throwaway gesture – the pivotal location of the site between port and city and the school’s wide community use make a celebratory building seems wholly appropriate. Nor is the colour a diversionary tactic – the school’s ‘teaching through art’ agenda in itself justifies a visual response and the building’s form and elevation treatment are highly civilised despite a limited and economic material palette.”

“The very loose structure necessary for teaching hundreds of children of every age in a largely open plan environment is arrestingly unconventional. This is a complex and challenging project made to look rather effortless in practice. Quality and consistency of architectural thinking is evident throughout, and the building delivers an impressive and significant addition to the cityscape. This is an intelligent design and the architects’ success in delivering a great project on an extraordinarily constrained budget and programme is recognised and applauded by the jury.”

Last October, Sir Nicholas Serota, Director of Tate formally opened the Red House and applauded those involved in the project:

“I want to congratulate the college principal, school headmaster and the governors of Plymouth College of Art for having the vision and strength to persuade the world that you can make a school that is rooted in imagination, creativity and the arts, and produce students who will be able to face the 21st century and who will bring to it a whole new way of looking at the world.”

Last year the Craft, Design and Fabrication Workshops, which were officially opened by creative visionary Sir John Sorrell, were shortlisted in the Building of the Year Category at the Michelmores Property Awards. 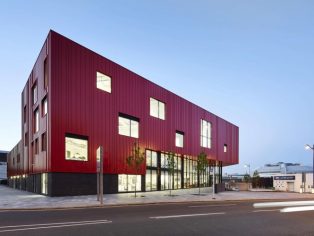 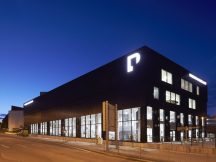 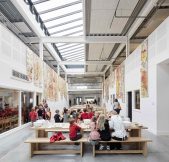